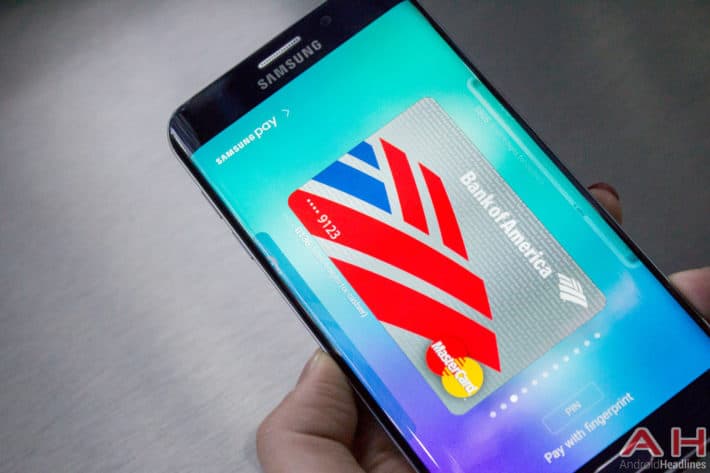 Samsung Pay will soon start hitting non-flagship smartphones, according to a report from Mashable. The Seoul-based tech giant is reportedly looking for new avenues of growth and is trying to come up with a strategy to bring its mobile payments service to more people around the world. As a part of that endeavor, Samsung will apparently bring Samsung Pay to mid-range and low-end devices, including the company’s entry-level Galaxy J lineup, sources close to the company said. The report indicates that the South Korean tech giant will first start rolling out Samsung Pay to non-flagship devices in India before deciding whether the idea is viable for implementation in more markets. Samsung Pay is said to debut on mid-range and budget Galaxy devices in India in the coming months, presumably this spring, though no specific launch date has yet been given.

While the tech giant is apparently willing to start experimenting with its mobile payments service on non-premium handsets, there are some limitations to what it can do in that scenario. Industry sources are quick to point out that while most of the mid-range and low-end phones Samsung recently launched have the necessary hardware to support Samsung Pay, they won’t be able to provide the same user experience that premium Galaxy smartphones can. An obvious example of the differences between them is the authentication method people will be able to use, as entry-level devices will likely only support PIN verification since they’ll lack a fingerprint scanner.

Even if this report isn’t accurate, it would certainly make sense for Samsung to start experimenting with more ways to expand the availability of Samsung Pay in India. Due to the sudden demonetization of several popular banknotes in the country, India is currently dealing with a significant lack of cash in circulation. That state of affairs quickly popularized mobile payments solutions like MobiKwik and Samsung rushed to introduce Samsung Pay in India in hopes of rapidly growing the user base of its service. While Samsung Pay still isn’t widely available in India, the company is currently in the process of expanding its availability after initially debuting the service earlier this week.