Samsung Pay, the mobile payment platform of South Korea’s largest conglomerate, has finally launched in India after opening for Early Access registrations a couple of weeks earlier. The company claims that the platform is compatible with a whole host of banks and payment gateways in the country, including Visa, MasterCard, American Express, Paytm, UPI (Unified Payments Interface), Axis Bank, HDFC Bank, ICICI Bank, SBI and Standard Chartered. The company also pledged to include support for Citibank going forward. While Samsung Pay had support for Visa and MasterCard in India right from the get-go, the company has now also added compatibility with American Express cards. Also new, is the support for the federal government’s Unified Payments Interface, which can now be accessed from right within the Samsung Pay app.

One thing to note here, however, is that the UPI integration is still in its beta phase, and Samsung says that it will take a couple more weeks for the final roll out. Either way, the UPI ID for Samsung Pay happens to be @pingpay, and users are free to create their own user ID ([email protected]) for financial transactions. In case you’re wondering how to get started with Samsung Pay, all you’ll need is one of the newer NFC-enabled handsets from the South Korean manufacturer. The platform is compatible with a number of Samsung devices, including the Galaxy S7, Galaxy S7 Edge, Galaxy Note 5, Galaxy S6 Edge+, Galaxy A5 (2016), Galaxy A7 (2016), Galaxy A5 (2017) and Galaxy A7 (2017). Samsung Pay is also expected to be available on the Gear S3 smartwatch in the near future.

With its launch in India, Samsung Pay is now available in twelve countries around the world, including South Korea, the U.S., China, Spain, Singapore, Australia, Puerto Rico, Brazil, Russia, Thailand and Malaysia. Samsung is offering a number of exclusive offers for early birds in India, including a 20% discount on Pizza Hut orders, a 15% discount on Barista orders and varying discounts on select combos at Café Coffee Day (CCD) outlets for MasterCard users. The company is also offering 100% cashback to Paytm users, as well as significant cashback offers for credit and debit card users of the aforementioned banks. In case you’re interested, you may click through the source link below to get more details about how to use Samsung Pay in India. 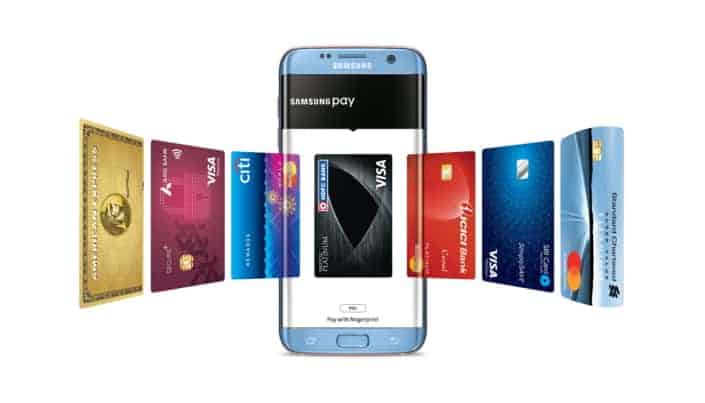