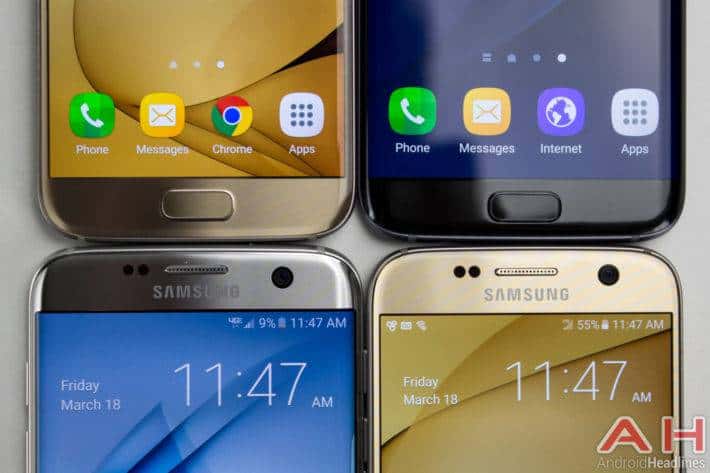 The Samsung flagship phones have waited long enough for their Android 7.0 Nougat upgrade, so users will like be happy to know that the Samsung Galaxy S7 and Galaxy S7 Edge should finally be receiving their Nougat upgrade on March 20th. Rogers just updated their list of devices slated for a software update. This will move the Galaxy S7 and Galaxy S7 Edge from Android 6.0.1 Marshmallow to Android 7.0 Nougat. This highly anticipated upgrade will not only introduce their users to the many pleasures that Nougat has to offer but also instill a new rendition of Samsung’s TouchWiz. Over the past couple of years, Samsung has steadily been working on a better version of TouchWiz by giving it a lighter and gentler touch. It has started to win people over that hated it at one time. Remember these updates are rolled out so if you do not get it right away on March 20th, you can always try to force it along by going to Settings, then About Phone, then System Updates, to see if it is ready to download.

The Android 7.0 Nougat upgrade offers both visual updates and behind the scenes, system updates. Nougat has Just-in-Time (JIT) built into it that will reduce the amount of RAM each app takes up – less RAM used by the applications running leave more RAM available for productivity. JIT also allows Nougat to be run on devices with lower RAM totals, meaning that even entry-level devices can efficiently run Android. Apps will run in a more optimized environment on Nougat, allowing apps to run in the background using less memory and less of your battery. The Vulkan API support will allow your graphics to look as realistic as possible – better reflections, less motion blur, and more life-like water reflections.

One of the most exciting features is the ability to run two applications at once in Multi-Window or split-screen fashion. You can put your music app in one window while you text or scroll through your emails in the other window. The two apps run independently from each other and are not affected by whatever you are doing in the opposite window. Quick Switch will allow you to jump between apps by double tapping the app switcher, though it only switches you between the two most recently opened apps. Doze is greatly improved and will now activate itself almost immediately after your device goes to sleep. This feature will save your battery and data usage even better than before. The notifications panel is another place you will notice some improvements – one of which is you can now customize the drop down panel to include your most used apps.