Google has been heavily targeting Chrome OS towards schools in the past few years, particularly K-12 schools, and it appears that it is beginning to pay off now. According to FutureSource, Google claimed about 58% of the market in the US in 2016, that’s up from 50% in 2015. The market share of windows stayed the same, as well as macOS (only dropping 1% from 6% to 5% in 2016), so the main difference here is the market share that Google took away from iOS. In 2014, iOS had a pretty large share, coming in at 26%. In 2015 that dropped to 19% and now it’s just 14%.

Now how does this compare to the rest of the world? Well the rest of the world looks much, much different. Windows dominates the K-12 market in the rest of the world, in fact it has been getting larger, while the Android share is shrinking. In 2016, Android made up 16% of the market, Chrome OS snagged 6%, iOS at 9% and Windows grabbed 65%. macOS and Linux both had minuscule shares, coming in at about 1% each.

What this shows us is the focus that Google has had on Chrome OS with Education over the past few years is indeed working, at least in the US. They and their partners have released numerous Chromebooks over the past few years, aimed at education. The majority of these have been rugged Chromebooks, since kids like to be rough on laptops, that makes a whole lot of sense for education. But on top of being rugged, some of Google’s partners like HP, Acer and Lenovo, have been releasing some pretty cheap Chromebooks that are targeting education customers only, which has definitely helped Google gain some market share.

For those that are unaware, Chrome OS is a pretty simple operating system and it’s actually basically perfect for classrooms. Seeing as they are already cheap, they are also easy to use since it is essentially just a browser. It also means that the IT department can control these machines much simpler. Say a student downloads something they shouldn’t have and it affects the computer? Well they can remotely clean the Chromebook from just about anywhere thanks to the cloud. 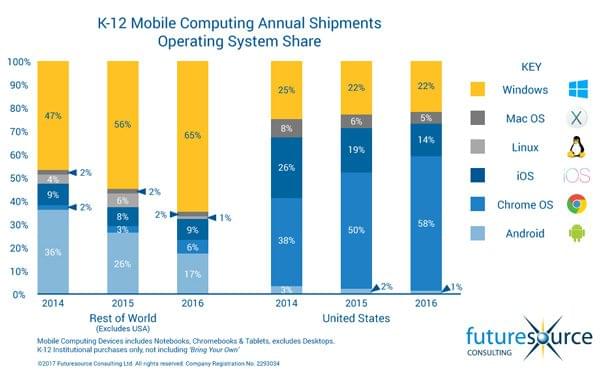