An independent analyst company, Canalys, is predicting big things for the smartwatch industry during 2017, with a market growth of 18-percent that translates into 28.5 million units shipped at a value of $10 billion. The business of watches is getting more complicated every day. Picking out a wristwatch was a simple task based on the type of watch you wanted – typical watch, a chronograph, or an underwater watch for diving – then pick out a Timex, Citizens, TAG Heuer, Omega, Rolex, etc. However, the market has changed drastically with the new smartwatches that are available where you can modify the face and band of the watch for an entirely different look and usually for a much cheaper cost than an expensive traditional watch.

Like many traditional companies fighting to compete in the electronic world, the watch industry has been reluctant to move forward and leave their old traditions behind. Although, it now seems that they are starting to release, what Canalys calls, ‘connected’ watches with limited functionality. They are designed for those that want a watch first, and a few added basic smartwatch functions. However, they say that watchmakers need to jump directly into selling a smartwatch if they expect to see any long-term growth. Many long-time watch wearers have given up wearing a wristwatch on a daily basis as their smartphones display the time each time they look at their phone. The need for an everyday watch is changing to the form of a smartphone, while specialty watches, such as a diver’s watch is still practical, but only for a small group of users.

The approach to developing and marketing a smartwatch are entirely different from a traditional watch. Spokesperson, Jason Low says, “Forming partnerships with technology companies will be the first step. A well-formulated strategy to sell a watch will play a larger role as watchmakers have to appeal not only to watch fans but consumers who are yet to buy a wearable.” With the addition of Android Wear 2.0, designing a new smartwatch is becoming a much easier task and one that many traditional watchmakers need to embrace if they want to grow and compete in this new field. Google has, in essence, designed the operating system along with the ability to access apps and other features that smartwatch buyers look for in a device. The image below highlights how Canalys expects the smartwatch market to continue to grow up until 2021. 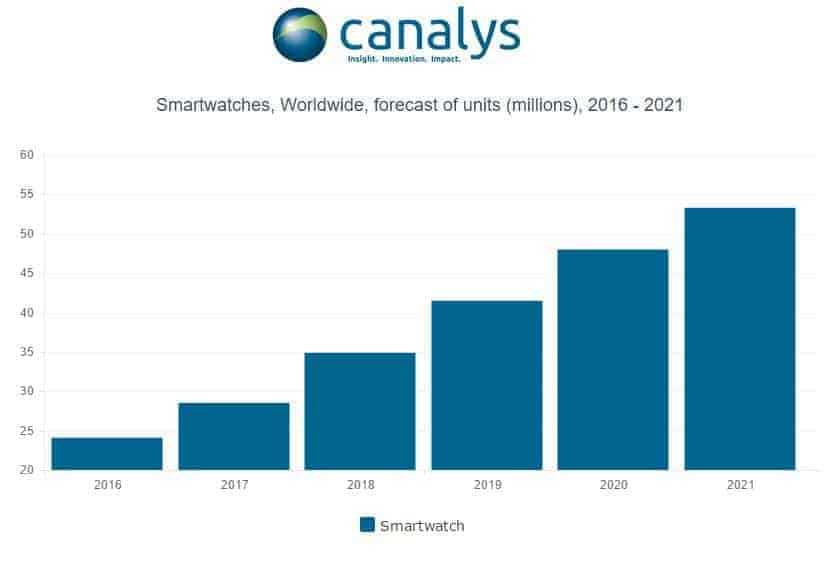