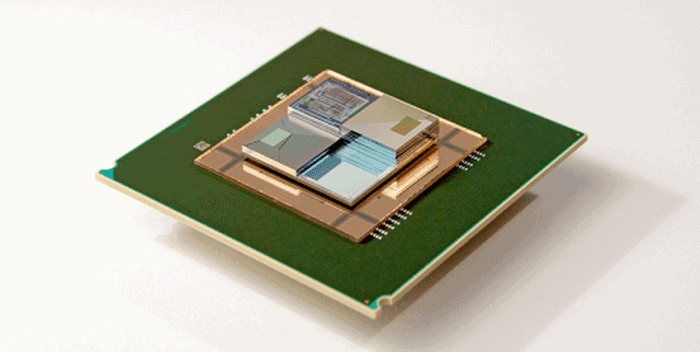 A group of researchers at IBM and ETH Zurich have recently developed a tiny redox flow battery which may be used for both powering and cooling computer chips in the future. The battery measures only 1.5mm in thickness, which could allow manufacturers to stack both a computer chip and a micro-cell battery in a single package.

The basic principles behind the miniature redox flow battery lie in an electrochemical reaction based on two liquid electrolytes used to produce electricity. The liquids are pumped into the battery cell from the outside through a closed electrolyte loop, and according to Dimos Poulikakos, Professor of Thermodynamics at ETH Zurich, "the chips are effectively operated with a liquid fuel and produce their own electricity." The research team has created the micro-flow battery using 3D printing and one of the biggest challenges was to construct it in a way that would allow for efficient supply of electrolytes while keeping the energy required for pumping the liquids to a minimum. Power-wise, the output of the new micro-flow battery is at a record-high considering its size, as the unit can produce 1.4 watts of electricity per square centimeter, and can provide a net power density of 1 watt per square centimeter even when the power required for pumping the liquid electrolytes is subtracted. Perhaps even more impressive is the fact that the electrolyte liquids used by the researchers are actually capable of cooling the package and dissipate heat "many times over what the battery generates as electrical energy."

Flow batteries have been previously used on a much larger scale, primarily in storing energy from solar power plants and wind farms. However, this is the first instance where scientists have been able to build a small flow battery capable of combining energy supply with cooling. Nevertheless, it should be noted that although the power density delivered by the new micro-flow battery is very high and enough for the unit to be self-sufficient, it's still not high enough to power a computer chip. But the proof-of-concept has now been provided and the researchers say that system can be further optimized by industry partners. Either way, this new approach to constructing flow batteries can benefit other areas beyond computer chips. Solar cells could also make use of micro flow batteries to store energy as well as maintain an ideal operating temperature. There are, of course, other battery technologies being worked on at the moment for various purposes, including water-soluble batteries and even solid state batteries.