A new Samsung smartphone bearing model number SM-J530 has been spotted on popular benchmarking website, GFXBench. Speculations in the online tech media seem to suggest that Samsung will eventually market this device as the Galaxy J5 (2017), although the South Korean company is yet to confirm that officially. Meanwhile, the listing reveals some of the key hardware specs of the upcoming handset including, the screen size, the processing chipset, RAM, internal storage and the cameras. The device received its Wi-Fi certification last month and has also popped up on Geekbench this week. With things shaping up the way they are, it probably shouldn’t be too long before the handset is launched officially, although, there’s still no definitive word on exactly when that might happen.

Taking a quick look at the hardware specs of the upcoming handset, the GFXBench listing seems to suggest that the SM-J530 will be an entry-level device with a compact form-factor. The smartphone will apparently feature a 4.8-inch 720p display panel, which is well and truly on the smaller side in the modern scheme of things. The listing also reveals that the handset will be powered by an Exynos 7870 SoC, which is designed and manufactured in-house by Samsung Electronics. The chip comes with an integrated 1.5GHz octa-core Cortex-A53 CPU alongside an ARM Mali-T830 GPU. The device is also expected to come with 2GB of RAM and 16GB of internal storage, but it’s not immediately clear whether there will also be a microSD card slot for capacity expansion.

On the imaging front, the upcoming smartphone will apparently carry 12 or 13-megapixel cameras on both front and back, which would be keeping in line with the growing importance attached to the front-facing selfie-cams these days, thanks largely to the popularity of social media platforms, such as Instagram and Snapchat. The GFXBench listing doesn’t give away too much more, but the recent Geekbench listing apparently suggests that the device will come with Android Nougat out-of-the-box. Either way, it will be interesting to see when Samsung will announce the Galaxy J5 (2017), but seeing as its predecessor was unveiled last March, it probably won’t be too long before this one is made official. 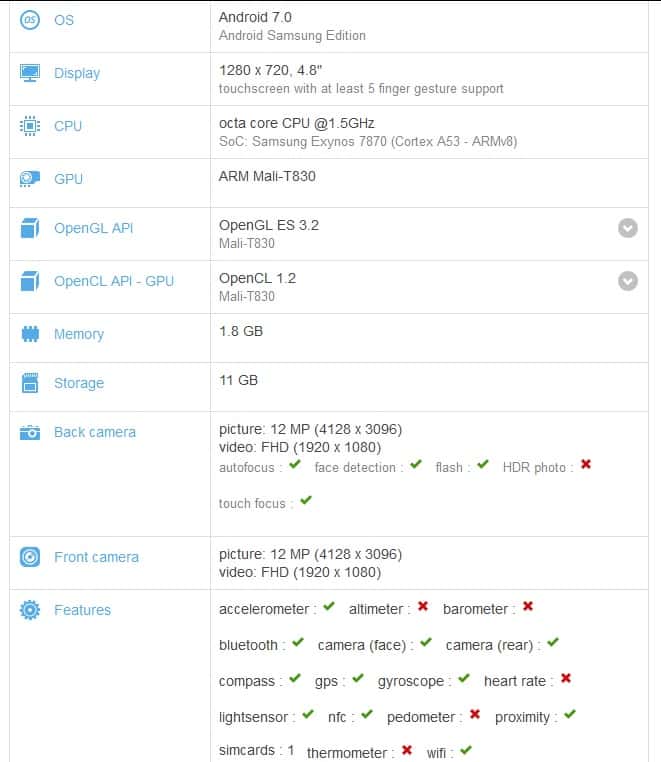