All three newly-announced Nokia smartphones will support VoLTE out-of-the-box, according to an article published by an India-based technology blog earlier today. As per Techmesto, the Nokia 6, Nokia 5 and Nokia 3 will all come with VoLTE connectivity, making them compatible with HD Voice services offered by many carriers around the world. The blog claims to have contacted HMD Global directly to enquire whether any of the devices will support VoLTE out-of-the-box, and apparently got a reply in the affirmative from a representative of the Finnish company. While there has been a wave of online speculations about this over the past few days, these latest developments should put to rest any further controversy regarding the matter.

VoLTE, or Voice over LTE, is often marketed as HD Voice and according to Wikipedia, “is a standard for high-speed wireless communication for mobile phones and data terminals”. It is known to provide significant improvements in voice-quality over traditional calls made via 3G UMTS or 2G GSM. While people around the world are starting to experience better quality voice-calling with VoLTE, compatibility with the technology is an especially important factor for smartphones buyers in India, given that unlike most other carriers, the new entrant in the country’s wireless telecom market, Reliance Jio, offers its voice services exclusively through VoLTE. The carrier offers data, voice and texts at rates that are highly attractive when compared to the incumbents and has already gained over 100 million subscribers in under a year.

VoLTE is a hardware-enabled feature, and needs to be supported by the phone’s modem in order to be available for use. However, the feature is not always available out-of-the-box, but can be rolled out to devices via software updates, provided that the device in question is powered by a compatible chipset. Most of the recent SoCs from leading chipmakers like Qualcomm and MediaTek are VoLTE-compatible, including the chips powering the three Nokia devices in question. While the Nokia 6 and Nokia 5 are powered by the Snapdragon 430, the Nokia 3 comes with a MediaTek MT6737 under the hood. With all three being VoLTE compatible, HMD could have pushed through a VoLTE update later on, even if the devices did not have VoLTE-compatibility out-of-the-box. However, now that the company has clarified that the devices will support VoLTE right away, it should hopefully put an end to all the speculations about whether the devices will be compatible with Reliance Jio’s voice services in India. 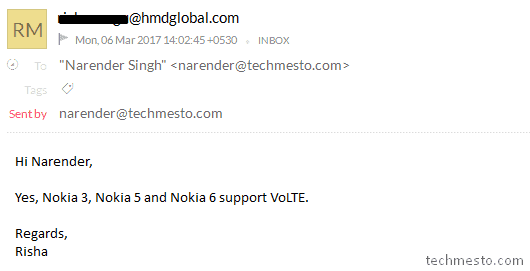