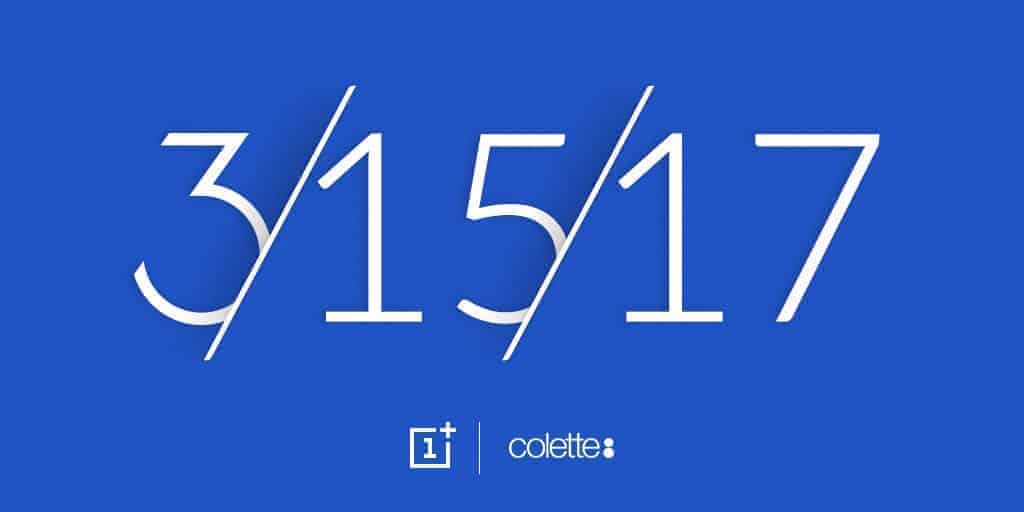 OnePlus has released a new teaser via their official Twitter page. The company teased March 15 date, and they've also mentioned Colette, which is a French clothing and accessories retailer. Now, on top of all this, OnePlus said the following: "Something is about to go down". That being said, the background of the image OnePlus shared is blue, and the company's logo also turned blue. So, what's this all about? Well, judging by the color change and the 'Colette' mention, we're guessing that a blue-colored OnePlus 3T is about to be announced, and it might be a special edition handset which will feature some accessories from Colette, or something of the sort.

Now, this is not exactly all that unexpected as OnePlus already partnered up with Colette in the past. The two companies partnered up for the OnePlus 2, OnePlus X and OnePlus 3. Now, the company's previous devices were not available in a blue color variant, despite the fact that OnePlus partnered up with Colette in the past, but this time around, things could be different. Such intensive use of a blue color in both the teaser and the company's logo definitely suggests something, and it seems like everyone expects a blue variant of the OnePlus 3T to be announced tomorrow by OnePlus and Colette. As many of you know, the OnePlus 3T is now available in Gunmetal and Soft Gold color variants, though you do have quite a few cases to choose from, just in case you'd like to mix things up, as OnePlus offers a number of wooden cases, along with a leather one.

The OnePlus 3T is a metal-clad smartphone that OnePlus introduced at the end of last year. OnePlus introduced this smartphone back in November, and it's still the company's flagship smartphone. The OnePlus 3T sports a 5.5-inch fullHD Optic AMOLED display, 6GB of RAM and 64GB / 128GB of non-expandable internal storage. This smartphone is fueled by the Snapdragon 821 64-bit quad-core processor, and a 3,400mAh battery is included in this package as well, and it is not removable. A 16-megapixel snapper is included both on the back and the front side of this smartphone, though we're not looking at the same sensors here, the rear-facing shooter is far more capable. Android 6.0.1 Marshmallow comes pre-installed on the device, but the phone is already upgradable to Android 7.0 Nougat. If you'd like to know more about the OnePlus 3T, check out our review, and we're eagerly awaiting OnePlus' announcement tomorrow in order to see whether we'll get a new color variant of the company's flagship.

Something is about to go down with @oneplus & @coletteparis – stay tuned. pic.twitter.com/Z9ETg7ach5