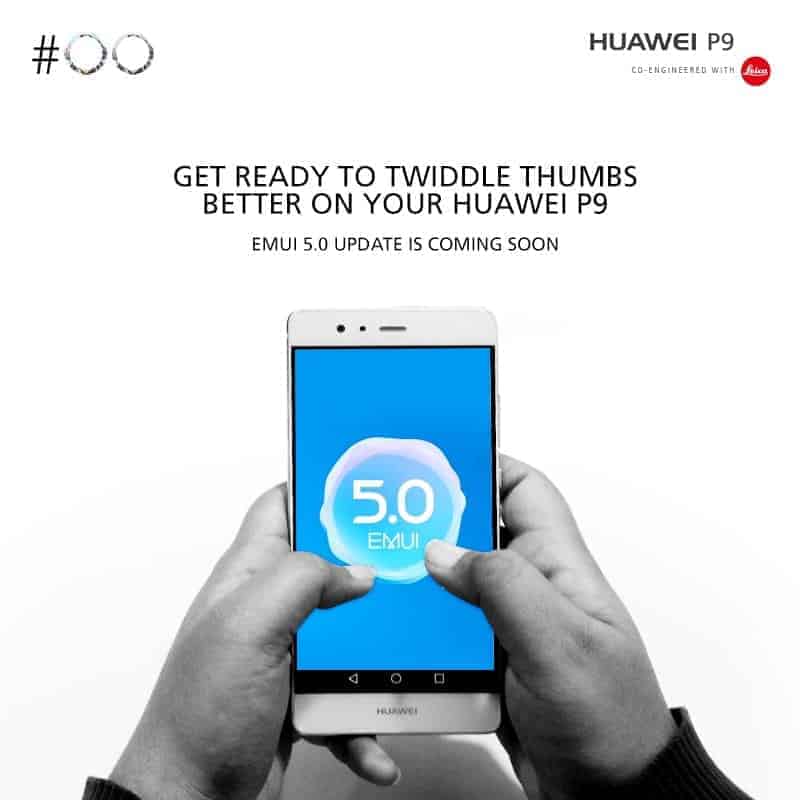 The Huawei P9 is expected to receive Android 7.0 Nougat by the end of Q1 2017. Such news come after Huawei India announced on its official Twitter account that the global rollout will commence soon. This tweet was posted alongside an image which came with the statement, "Get ready to twiddle thumbs better on your Huawei P9", likely meaning that Android 7.0 Nougat will provide a faster and better user experience. Once the global rollout commences, Huawei P9 users can expect to receive EMUI 5.0, which is Huawei's custom user interface, and also one of the latest versions from the company, with the latest version being EMUI 5.1. The latest security patch from Google is also expected to be included in the upcoming update.

As the first quarter of the year is quickly coming to a close, with just a few weeks left, users can expect to receive the update within the next few weeks. The Huawei P9 is the company's 2016 flagship, and it was originally launched with Android 6.0 Marshmallow. It has been almost one year since its launch, and Huawei has yet to upgrade the device to Android 7.0 Nougat, even though the Chinese smartphone manufacturer promised users that it will bring the latest version of Android to the device as soon as possible. However, Huawei P9 units in China have already received Android 7.0 Nougat, and the rollout took place last year in December. The company has also launched the successor to the Huawei P9, and it comes in the form of the Huawei P10.

When the Huawei P9 was first announced last year, it came off as a pretty high-end smartphone, and still is to this day. It packs a 5.2-inch FHD 2.5D display, and is powered by a Kirin 955 processor. Graphics are handled by the Mali-T880 MP4 GPU. Under the hood, it packs 3GB of RAM coupled with 32GB of internal storage which can be further expanded via a microSD card. The cameras on this device were co-developed with Leica, and was the first Huawei device to sport the Leica branding, something which we see on all their flagship devices now. There are two 12-megapixel sensors here on the back of this Huawei P9, one being a monochrome camera and the other, a RGB camera. On top of that, there is a 8-megapixel camera around the front to handle selfies. Keeping the lights on is a 3,000mAh non-removable battery, and there is also a fingerprint scanner on the rear of the device.