Huawei has just announced the Huawei P10 Lite, the company’s all-new mid-range smartphone. As most of you probably already know, the Huawei P10 and Huawei P10 Plus flagships were announced during this year’s Mobile World Congress (MWC) in Barcelona last month, and we were wondering when will their more affordable sibling land. Well, that has just happened it seems, right after the device leaked in Netherlands. The source passed on the news along with an image from the press conference, read on.

The Huawei P10 Lite is made out of metal, while all of its physical keys are placed on the right-hand side of the device. A Type-C USB port can be found on the bottom of this smartphone, and it is flanked by a speaker and a microphone. On the back of the device, you’re getting a single camera with an LED flash, and a rear-facing fingerprint scanner. The Huawei P10 Lite features a 5.2-inch fullHD (1920 x 1080) display, along with 4GB of RAM and 32GB of internal storage. The device is fueled by the company’s HiSilicon Kirin 655 64-bit octa-core processor, which is a mid-range processor, just in case you were wondering. A 12-megapixel BSI snapper is placed on the back of the Huawei P10 Lite, and an 8-megapixel shooter can be found on the front side of this smartphone. A 3,000mAh non-removable battery is also a part of this package, and quick charging is also included. Android 7.0 Nougat comes pre-installed on the Huawei P10 Lite, and on top of it, you’ll get Huawei’s very own Emotion UI (EMUI) 5.1 skin, which is the newest version of Huawei’s skin that also launched on the Huawei P10 and Huawei P10 Lite. The Huawei P10 Lite comes in Black, White and Gold color variants, in case you were wondering.

Now, we still don’t know how much will this smartphone cost, but the device has been listed in Netherlands for €349. Now, do keep in mind that we’re looking at an unofficial listing which surfaced before the phone was announced, so chances are that the device will be more affordable than that. All in all, we’ll have to wait and see for Huawei to release its official price, but you can expect the Huawei P10 Lite to be quite affordable, and it packs in some really compelling specs, while it also looks really nice as well.

UPDATE: Do keep in mind that the company did not confirm the announcement of the Huawei P10 Lite just yet, but the source did share a picture from its unveiling, and seems quite confident that the phone has been announced. There is a possibility that this is just a behind-the-doors unveiling of the phone, we’ll just have to wait and see. 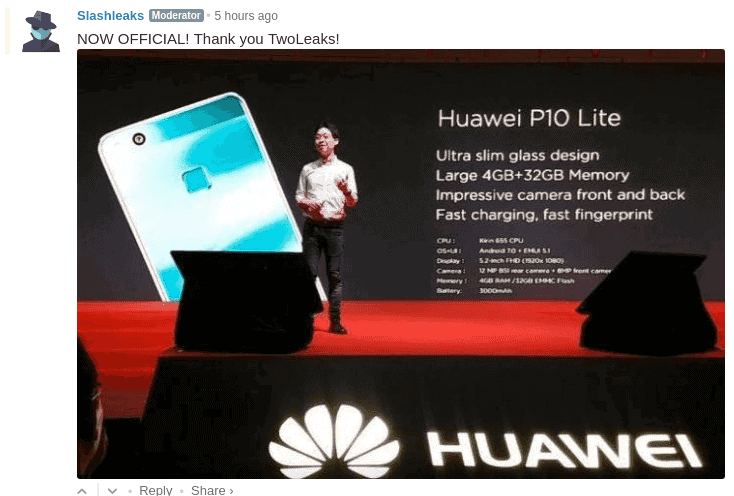