This past week at Mobile World Congress HMD Global decided it would take us back to the turn of the century as it decided to re-release the mega-popular Nokia 3310. On Friday Gresso, a Russian company that specializes in luxury phones and accessories announced it to would release its own version of the phone called Presso 3310. The phone will be a high-end phone that will  feature Grade 5 titanium all the way down to the buttons. It will also have 32GB of storage and a 3MP rear camera, all which are upgrades from the HMD Globals version of the Nokia 3310. However, if you want this high-end phone it will cost you around $3,000.

Both phones are a reboot of the Nokia 3310 that came out in September of 2000 and came with an 84 x 48-pixel monochrome display and one of the original mobile games, Snake. In total, the original had a five year run and sold 126 million phones worldwide. The reboot feature phone has a somewhat different look from the original and comes in four different colors, Orange, Yellow, Black, and Grey and don’t worry as it still has Snake. However, its price tag is considerably cheaper as the materials aren’t as high end. It does come with 2.5G connectivity for some web surfing, 22 hours of talk time, a month of standby time, and a 2MP camera with a LED flash. But of course those of us in the US won’t get a chance to use the phone as the bandwidth it works on is not supported here. So if you choose to buy one, it will just be a sentimental paperweight.

Gresso is no stranger to when it comes to releasing its own version of big name phones as it has iPhone 7 and iPhone 7 Plus versions that are made of 18k gold and titanium bodies and run in the neighborhood of $4000. The company also has a few different cases that can run you $500-$800. It also has its own smartphone, Gresso Regal Smartphone, which runs on Android that will cost you $3000. There is no word on the when it will release the Presso 3310. 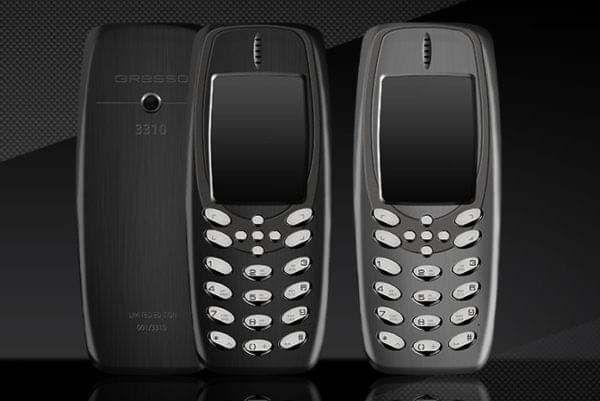