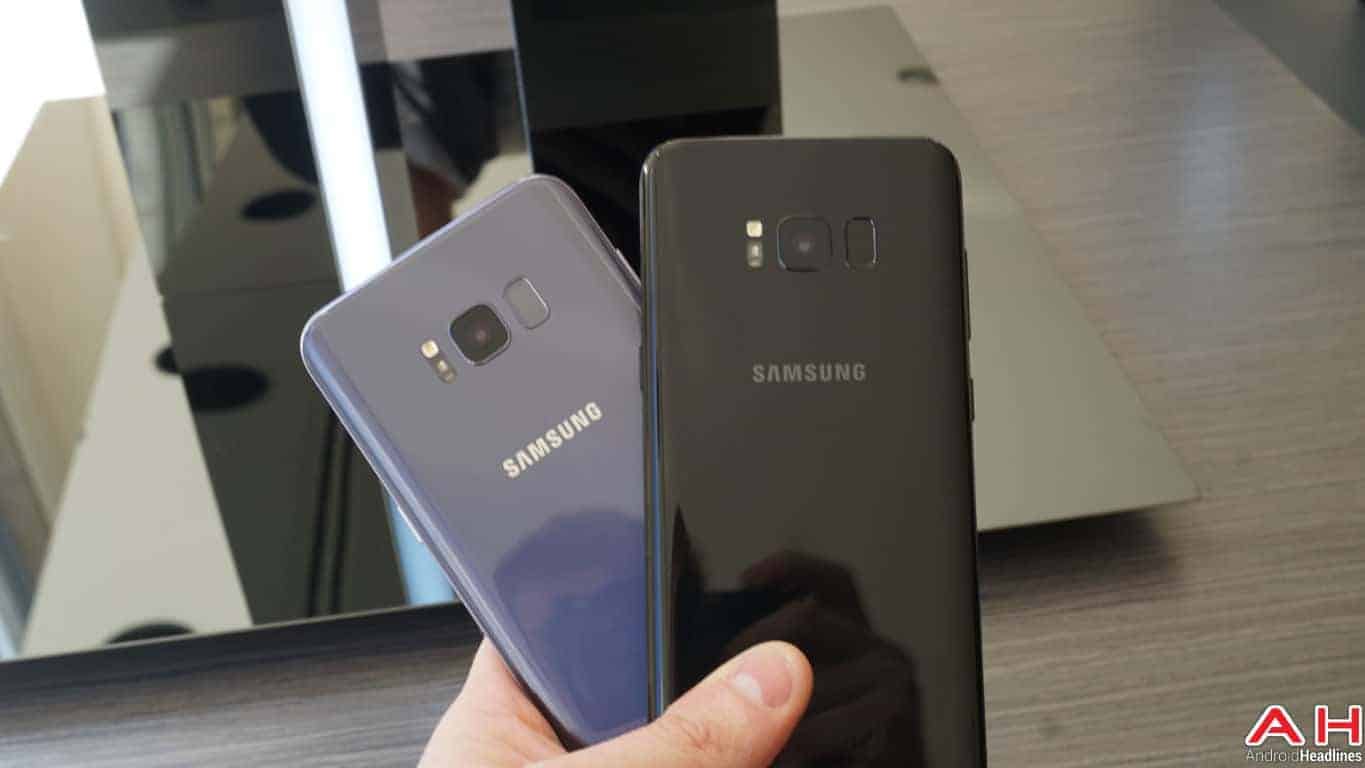 The Galaxy S8 Plus has similar battery life to that of the Galaxy S7 Edge, according to Samsung’s official website detailing the company’s newly announced flagship. A look at the spec sheet of the Galaxy S8 Plus shows that the device will offer a bit more MP3 playback (AOD off) time and allow for up to 13 hours of browsing the Internet on a 3G connection, compared to the Galaxy S7 Edge that allows 12 hours of similar usage at maximum. However, the new Galaxy-branded flagship won’t allow as much MP3 playback (AOD on) and talk time as its predecessor did, and also won’t last as long when browsing the Internet over a Wi-Fi connection.

While the official battery life figures of the two devices are mostly similar and the differences between them are small, it remains to be seen how well the Galaxy S8 Plus does in practice seeing how phone vendors usually go out of their way to pump those numbers up as much as possible. The battery life-related differences between the Galaxy S8 Plus and the Galaxy S7 Edge are comparable to those between the Galaxy S8 and the Galaxy S7, as the cheaper variants of both handsets feature a smaller battery that won’t last as long as the one powering their larger counterparts. Refer to the gallery below to see full comparisons of official battery life figures of Samsung’s 2016 and 2017 flagship duo.

Compared to last year’s models, Samsung upgraded the screen real estate of its flagship phones without increasing their battery capacity and actually decreasing it in the case of the Galaxy S8 Plus. While that would usually guarantee worse battery life, the newly announced handsets are powered by the 10nm Snapdragon 835 and the Exynos 8895 chipsets that are said to be much more energy efficient than their predecessors. While that doesn’t mean the Galaxy S8 and the Galaxy S8 Plus will necessarily allow more usage time than the Galaxy S7 and the Galaxy S7 Edge, it at least implies they’ll be much better at energy management. On the other hand, one objective upgrade over the last year’s handsets is the battery degradation resistance of Samsung’s new pair of high-end smartphones. 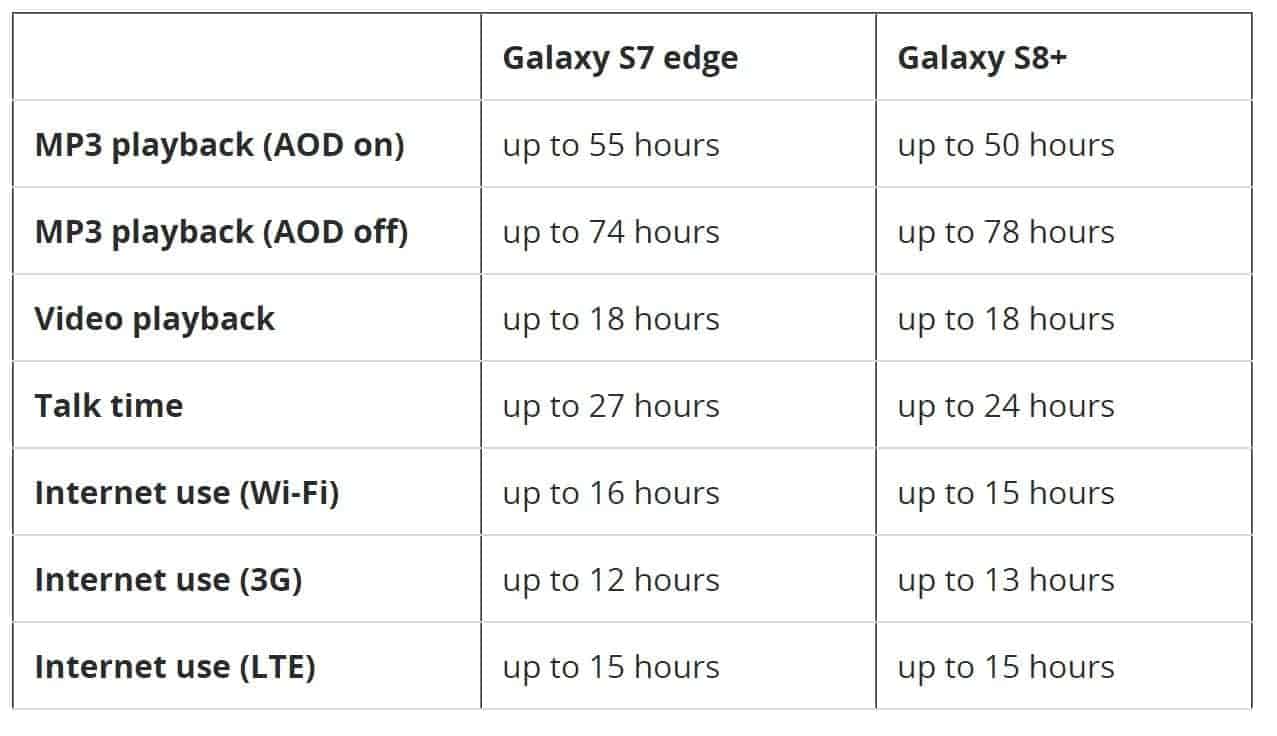 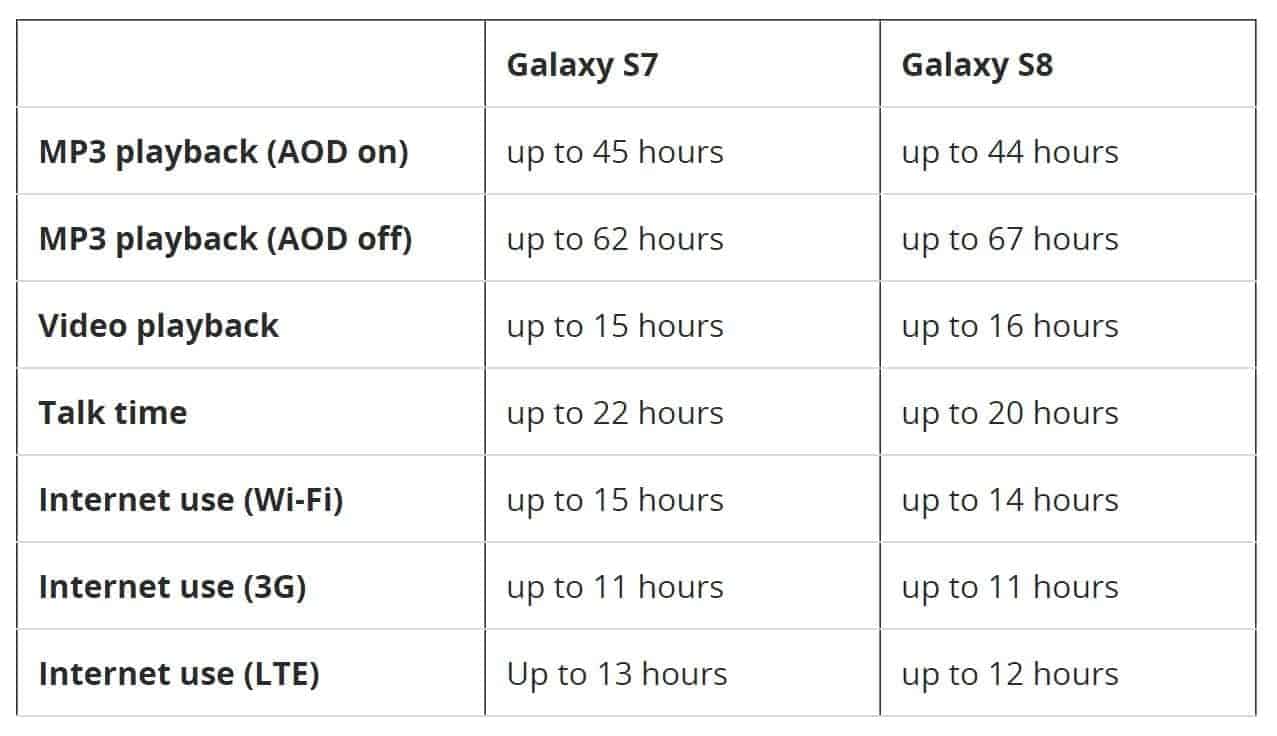