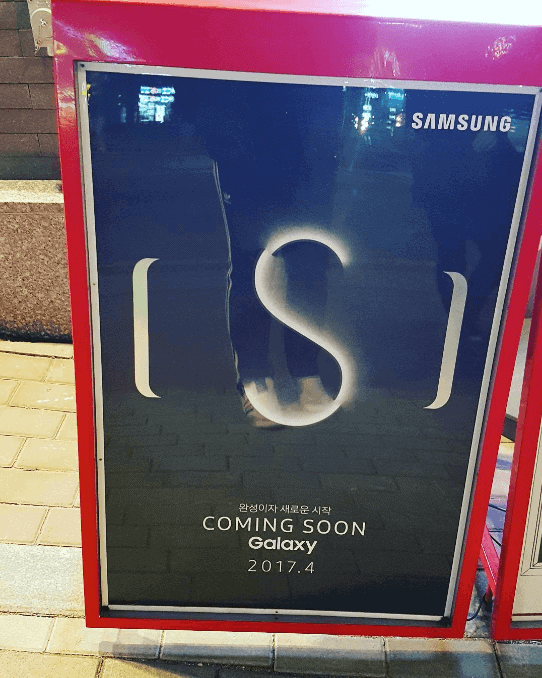 The Galaxy S8's event poster has just leaked, and probably revealed the device's release timeframe. There are two images available in the gallery down below, the first one shows off the aforementioned event poster, while the second one simply says "Coming Soon Galaxy", along with the device's release timeframe, which is actually present on both images. If you take a look at the first image, you'll get to see the letter 'S' which is placed in the middle of the Galaxy S8, in a way. The phone's top and bottom bezels are flanking the letter 'S' in this image, and this actually looks quite similar to the company's recently released teaser for the Galaxy S8's launch event.

As you can see, both images are suggesting that the Galaxy S8 will be released in April, which is actually what we've been expecting. Samsung had confirmed that the Galaxy S8 will be announced on March 29th in New York, but the company still did not say when will the device become available for purchase. Well, a ton of rumors suggested that it will be released in April, and these two images only confirm that, though unfortunately, an exact release date is not available just yet. Thanks to rumors and leaks, we have a ton of detail when it comes to the Galaxy S8, and also its larger sibling, the Galaxy S8 Plus, which is also expected to land on March 29.

The Galaxy S8 will sport a curved QHD Super AMOLED display, and will ship with really thin bezels. The Galaxy S8 will not sport a physical home key, which is definitely something new for Samsung, instead of that, you'll get a set of on-screen buttons, and the fingerprint scanner will be placed on the back of the device. This smartphone is also rumored to ship with a facial recognition technology, and Android Nougat will come pre-installed on the Galaxy S8, with Samsung's custom UI on top of it, of course. The Exynos 8895 SoC will fuel the Galaxy S8 in some markets, while the Snapdragon 835 will pitch in elsewhere. The device is rumored to ship with 4GB of RAM, though a Chinese variant of the Galaxy S8 might sport 6GB of RAM, at least according to recent rumors.