IDC has just unveiled their latest report detailing how wearables did in the fourth quarter of 2016, and by no surprise Fitbit has remained number one. They shipped 6.5 million units in the quarter, although that is a 22.7% drop compared to the year prior where they shipped 8.4 million units. They did also lose around 10% market share, dropping from 29% to 19.2% in Q4 2016. Xiaomi is the big mover this time around, seeing a year-over-year growth of about 96.2%. They shipped 5.2 million units last quarter, compared to 2.6 million in the quarter before it. That's good enough for second place, just behind Fitbit with 15.2%. Xiaomi likely has gained such a huge portion of the market share due to their wearables being fairly cheap, the Mi Band 2 actually costs less than $20.

Rounding out the top five, we have Apple, Garmin and Samsung with 13.6%, 6.2% and 5.6% respectively. Out of those three, only Garmin saw a drop in shipments, while Garmin and Apple saw a drop in market share. Samsung saw a pretty decent growth of 37.9%, and this is likely due to them releasing three wearables just before the fourth quarter in the Gear Fit2, Gear S3 Classic and Gear S3 Frontier.

For the full year, there were 102.4 million units shipped, that's a 25% increase from the 81.9 million shipped in 2015. Apple is also the only maker that shipped less products and grabbed a smaller portion of the market share in 2016 than in 2015. For the full year, Xiaomi's numbers look a bit more competitive, instead of the massive 96.2% increase in the fourth quarter, they saw a growth of 31% for the full year. 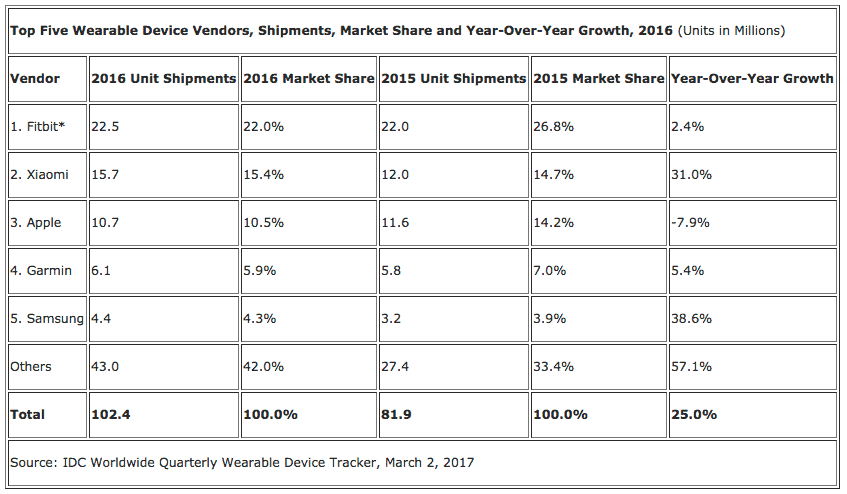 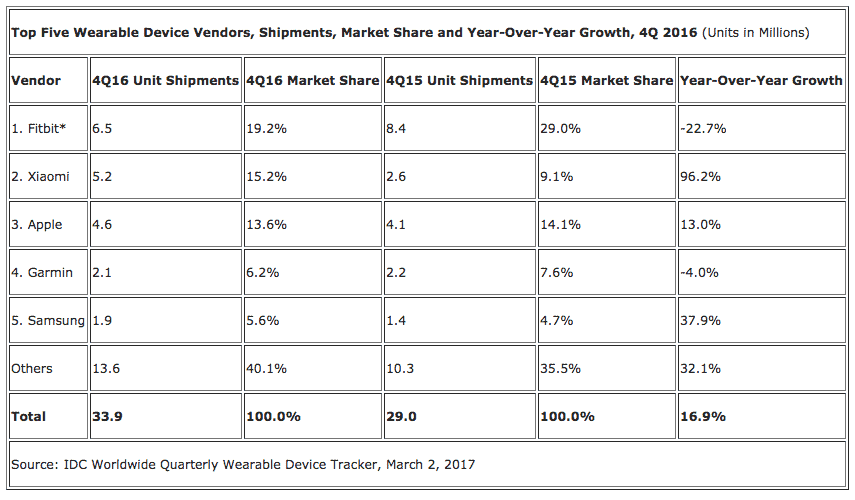