Facebook is now labeling fake news stories posted on its social network as being "disputed." The flag denoting content that independent sources have proven to be inaccurate or outright false started appearing several days ago. Initial reports suggest that the label is currently only appearing in people's News Feeds, meaning that knowingly searching for fake news on Facebook won't present you with the same label. An example of this functionality in action can be seen below. The Seattle Tribune's story on President Trump's unsecured Android device being a source of some recent White House leaks has been proven as false by Snopes and Politifact, and Facebook clearly highlights that fact below the article's title. While the label doesn't show up if you search for this same story on Facebook, articles from Snopes and Politifact disputing it are still presented in Facebook's search results right under the original story.

Facebook's decision to label fake news as disputed instead of untrue is in line with the company's careful approach to the controversy that started in the run-up to the 2016 presidential election in the United States. While the social media giant acknowledged the issue, it was reluctant to aggressively combat the dissemination of fake news as it wasn't keen on being accused of censorship. The new label denoting disputed news stories was originally announced back in December along with some other measures designed to highlight factually inaccurate stories without outright censoring them. A related set of features was also rolled out in early February and more similar updates are expected to follow in the coming months.

Facebook previously revealed that the "disputed" tag will only be attributed to stories that independent organizations have verified as being false, meaning the company's system wasn't designed to tackle dubious news pieces in real time. While most industry watchers agree that state of affairs is far from ideal, the new additions to Facebook still indicate that the social media company is taking some steps to combat false news stories, even though its critics are calling for it to do much more. Facebook's anti-fake news features follow shortly after Google introduced its own mechanisms for combating the dissemination of false information. Among other things, Facebook's rival decided to start banning fake news websites from participating in its advertising network. 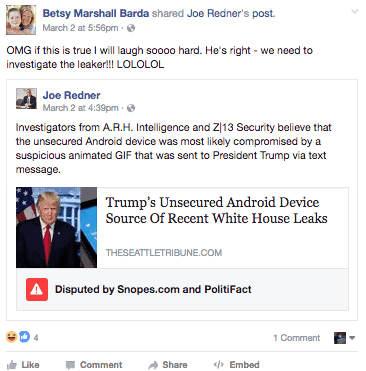