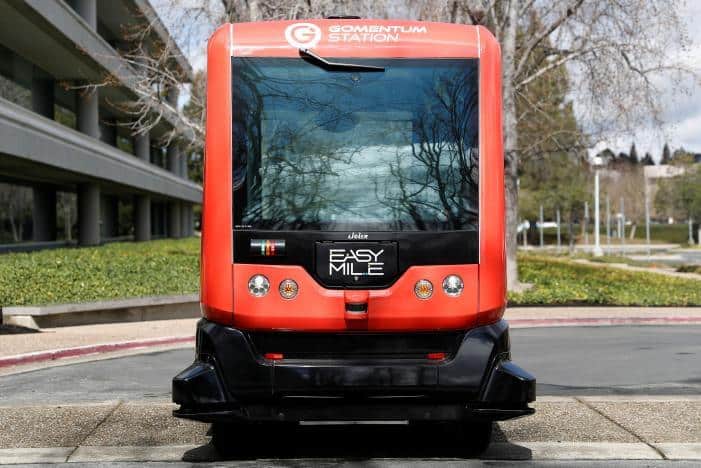 Two fully autonomous buses have popped up in San Ramon, California, seen darting about a parking lot for testing. The EZ10 buses, created by French company Easymile, cost $250,000 each and seat less than normal a normal bus, but are completely and utterly autonomous, having no backup driver ready to take the wheel, and no mechanism for anybody on board to do so. The buses can hold up to 12 passengers at a time, and will reportedly be making their way out into the streets throughout California in the near future, though no exact date was given. Estimates say that the buses will likely end up on the list for DMV approval and out onto public streets for actual commercial use either near the end of this year or the beginning of 2018.

The testing of these buses is being done hand in hand with a number of companies and government agencies under a law in California that passed about a year back, allowing fully autonomous vehicles with no human control mechanisms to conduct testing on public streets, albeit at speeds low enough to be considered impractical for transit. This acts as a natural limit to what can be done with these vehicles at the time and where they can go. Testing with actual consumers on board is not outright prohibited, but the letter of the law prevents options in testing from appealing to consumers. This allows tests to involve people who are involved in the project directly.

The same law that allows this test puts California on the short list of states that allow fully autonomous vehicles onto public roads without pedals or steering wheels, a list that also includes Texas, where Google has been busy testing the fruits of their self-driving department, now known as Waymo, as far back as 2015. This program, should it move forward, will be California's first time ever having completely autonomous vehicles with no on-board controls on their public roads, after denying Google the right to do similar testing a while back. Should the program go off without a hitch it will not mark the very first commercial debut of a self-driving technology; that honor actually goes to Uber, for live consumer testing of their own self-driving solution, though Uber's test did involve control equipment and a human ready to take the wheel if needed.