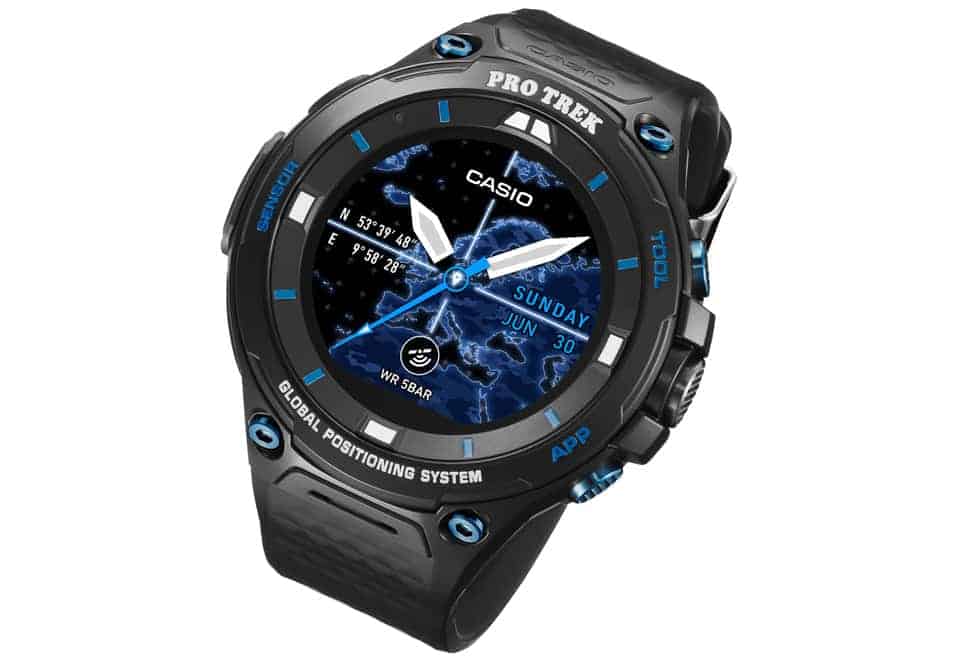 Simply put, the main differences between the upcoming limited edition model and the Casio Pro Trek WSD-F20 unveiled earlier this year lie in the inclusion of a sapphire crystal display and ion plating on the exterior. It also carries a different color scheme embracing a black case with blue elements, but like the full-production model, it boasts water resistance capabilities at depths of up to 50 meters (5 bar). Otherwise, in terms of specifications, the Casio Pro Trek WSD-F20S features a 1.32-inch TFT LCD circular display with the same “flat tire” at the bottom as before, and a resolution of 320 x 300. Connectivity-wise, the wearable is backed by Wi-Fi, Bluetooth 4.1, and GPS. Not unlike the standard model, the limited edition smartwatch runs Google’s latest operating system for wearables Android Wear 2.0, making it compatible with smartphones running Android 4.3 Jelly Bean OS or above, as well as iPhones running iOS 9 or higher. The Casio Pro Trek WSD-F20S is apparently powered by a battery that can be fully recharged in around two hours, offering more than one day of “normal use” on a single charge. Lastly, the smartwatch should take advantage of a variety of sensors, including a compass, barometer, and altimeter.

As mentioned previously, the Casio Pro Trek WSD-F20S is a very limited edition device, as only 500 units will be manufactured. The smartwatch will be showcased later this week at Baselworld in Basel, Switzerland, but for the moment pricing and availability details remain unknown. However, given the fact that the standard Casio Pro Trek WSD-F20 will likely have a price tag of around $500, it’s fair to assume that the limited edition model will be positioned in an upper price range only for the biggest enthusiasts.