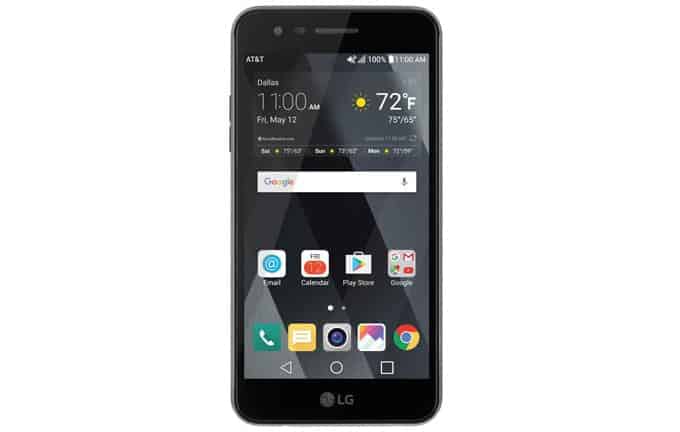 AT&T is adding to their prepaid lineup on Friday, adding the LG Phoenix 3 to their existing lineup of smartphones. Beginning Friday, March 10th, AT&T GoPhone users will be able to purchase the LG Phoenix 3 for $79.99. Remember that because this is a prepaid smartphone, there is no equipment installment plans nor a contract, so this is the full retail price. Customers will be able to order it online through AT&T's website, or by heading into any of their over 5,000 retail stores nationwide.

As far as specs go, the LG Phoenix 3 sports a 5-inch FWVGA display, thats a resolution of 854×480 pixels. That's pretty low by today's standards, but that's also what you'd expect for a full retail price of $79.99. There'a 16GB of storage included, along with a 5-megapixel rear camera and a front-facing camera that does have a mentioned megapixel count. Inside is a 2500mAh battery, and 1.5GB of RAM. The entire package is running on an unnamed quad-core MediaTek processor. Finally, it is running on Android 6.0 Marshmallow, which isn't the latest and greatest version of Android from Google, but it's pretty close.

This isn't a particularly bad phone for those on AT&T GoPhone that may need a new phone but don't want to pay hundreds for a new one. The LG Phoenix 3 isn't going to hold a candle to the new LG G6 or even many of the other flagship devices coming in the next few months, but on the other hand, the LG Phoenix 3 is also about a tenth of the price of those other smartphones. So you're definitely getting your money's worth with this one. AT&T hasn't mentioned whether this will be available on Cricket or even on their postpaid side of things, so at this point it's looking like this might be exclusive to AT&T GoPhone. Now the company did sell the LG Phoenix 2, and it apparently did fairly well for the company, which is why they went back to LG and asked for a successor. With the addition of the Phoenix 3, AT&T now has an option for just about every budget, which is important for keeping customers and getting them to buy new smartphones.