Google’s Chrome OS is already a fine operating system for business installations like kiosks and workstations, and Google’s big reveal of Android support for Kiosk Apps, along with a number of improvements to device management and administration, are poised to make it even better once Chrome Version 57 hits. The update is slated to come in the near future, and will bring the ability to add in Android apps to your kiosk setup, if your Chrome OS kiosk device happens to support Android apps. On top of that, a new interface for Kiosk App management, shown below, is on the way. Along with these changes, those who are charged with managing a fleet of Chrome OS devices will find a number of new options at their disposal.

The Kiosk management console is available to administrators of any number of Chrome OS devices, and supports pushing apps to given kiosks from the Play Store via the Chrome Management console. This means that administrators can manage what apps to install or delete, as well as which ones are front and center or which ones are locked away for certain users only, whether they have physical access to the kiosk device in question or not. This also allows mass installation and management of an entire fleet of devices, including the ability to set up an entire fleet to work the same way, or to configure certain devices differently.

On the device management side, Google has announced that it is now easier than ever to sign up for a Chrome kiosk. From here on, all an administrator will need is their name, email address and phone number to get started. Google is sweetening the deal by throwing in two trial kiosk management licenses, allowing work to begin immediately and without any obligation or commitment. A number of new APIs are also hitting kiosks through the Chrome Device Management suite, allowing for a number of new administration actions and device capabilities. Developers can even code the APIs into third party apps, allowing for a number of Chrome OS device management actions to be completed without having to use Google’s official solution. 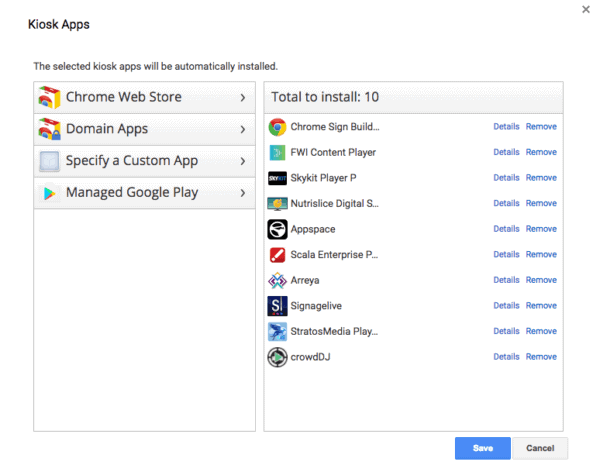