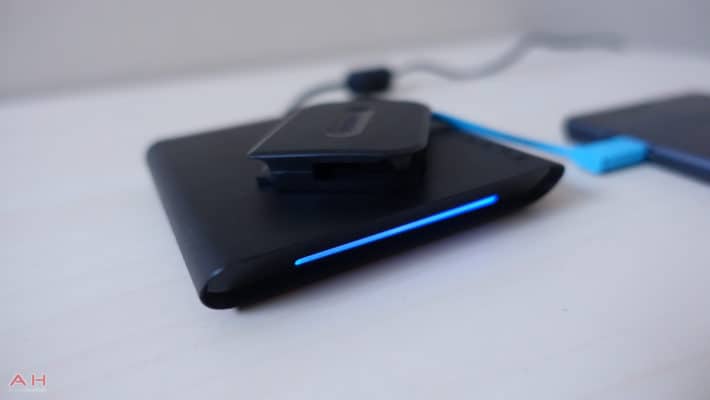 As part of MWC 2017, the AirFuel Alliance released a statement to welcome new members, new technological implementations, and new infrastructure solutions. For those unaware, AirFuel is a alliance made up of over 150 corporations and businesses seeking to up the ante for wireless charging. Its leading goal is to make wireless charging less ambiguous and more widely usable. Prior to such an alliance, wireless charging was more of a device-specific feature that was not what someone might call universally standardized. However, there is a substantial market for wireless charging – with even Disney getting into wireless charging development – partly owing to considerable headway made by the alliance. In short, the companies involved seek to create, strengthen, and maintain an open, wireless charging ecosystem. Even Samsung's wireless charging solutions adhere to the Alliance's standards for certification and AirFuel certification for LG's new G6 is also included in the press release. AirFuel says that will allow LG G6 users to "charge their phones wirelessly at home and at public venues like Starbucks."

New members to join the AirFuel Alliance are said to include Bose Corporation, GaN Systems, Gengee, Handeholder Products, Inc, Huawei, Metaboards, Ltd., Motorola Solutions, Redpine Signals, Inc., Shenzhen Hongizsheng Technology Co., and Zonecharge WirelessPower Technology Co. In addition to announcing new partners in its efforts, the alliance provided insight into new advancements from previously enrolled members. The new technologies come from Gill Electronics, Kimball Office, and OFS Brands and are focused on creating standards for furniture with truly integrated wireless charging solutions built right in. Unlike previous attempts at similar solutions, these new "resonant-based solutions deliver spatial freedom and allow for the charging transmitter to be concealed." The notable improvement over previous standards is that, with the new innovations, multiple devices to be charged from a single, fully-integrated charging point and at greater distances from the charge point itself. The solutions can be built into a wide variety of surfaces ranging from table and desks to direct integration with infrastructure.

Going beyond the creation of new technologies, alliance member Chargifi has also created a marketable platform for the IoT using AirFuel standards. The platform is intended to turn wireless charging into a service. For example, venues such as Starbucks and solution manufacturers will be able to market charging as either a standalone or value-added service using the platform. The move is a further advancement of the idea that wireless charging should become a standardized part of device platforms, with charging being available at a multitude of places to keep technology powered on, on the go. AirFuel is also continuing its research into more long range, non-magnetic solutions including the use of RF, ultrasound, and lasers to provide power. AirFuel Alliance President Ron Resnick also used the announcement to express confidence in the ongoing efforts. According to Resnick, "This is going to be a watershed year for wireless charging."