Earlier this week, OpenSignal released their report showcasing the four wireless carriers and which ones have the best speeds in certain areas, as well as which one is the fastest overall. Verizon and T-Mobile topped the list, tied for first place. And that wasn't something that Verizon was too happy about. The folks at Verizon believe that their network is still the best (a point that is hard to argue), and released a statement about the report from OpenSignal. Basically stating that crowdsourced reports like that from OpenSignal, mostly benefit downtown areas, but there are plenty of rural areas in the country that Verizon covers.

Verizon does have a point, crowdsourced data does benefit downtown areas because there are more people in those areas, thus more people using their app for speed tests and such. But then again, tests like RootMetrics aren't perfect either, seeing as they sometimes use outdated hardware and software to test networks. So it's hard to really gauge who has the best network from these tests. And as Verizon stated, the true test of theirs or any network, is their customer's willingness to stick with them. And Verizon has indeed had the lowest churn rate of the four national carriers, so it's clear that customers are wanting to stay with Verizon, at least for now.

At the time of writing, T-Mobile nor John Legere have responded to this statement from Verizon. It's likely that the outspoken CEO will respond at some point, but as many are pointing out on Twitter, Verizon opted to leave out their largest competitor, AT&T. A competitor who performed terribly in the OpenSignal test, being at the bottom of the pack with Sprint. A bit interesting to see Verizon talk about T-Mobile and Sprint, but not AT&T, the second largest carrier in the nation. Verizon does cover over 2.4 million miles of the United States with 4G LTE and are already working on 5G coverage, so if you're with Verizon, chances are you have LTE coverage right now and will get 5G in the next few years, something you can't really say about the other three carriers in the US. Although T-Mobile does cover almost the same amount of people as Verizon now. 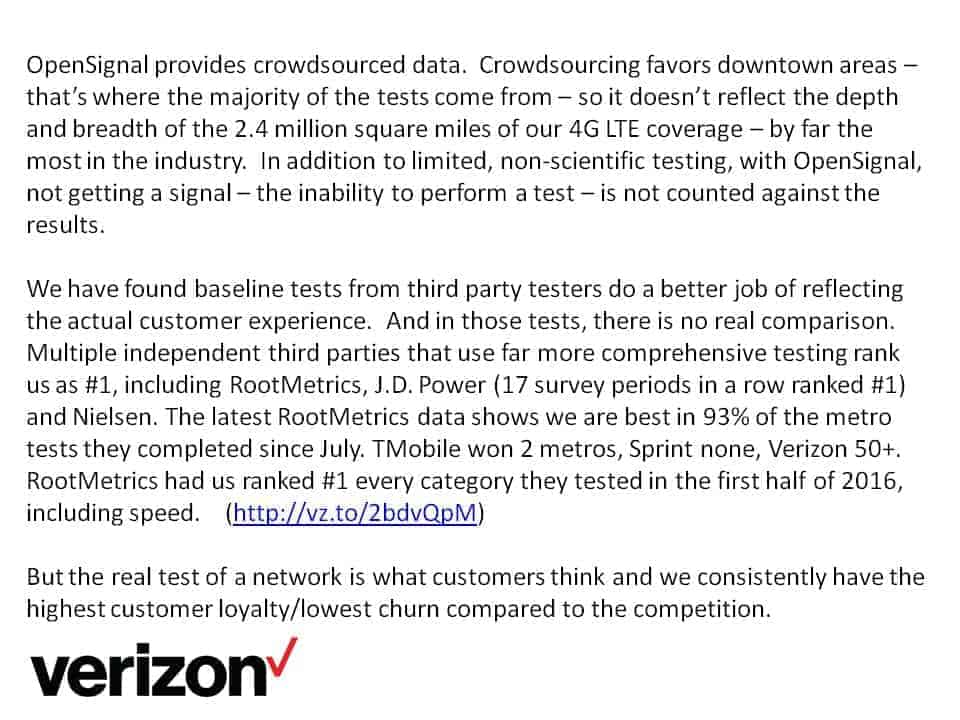