A new and unknown Sony Xperia handset has received its Bluetooth SIG certification. Unfortunately, comparatively little is known about the new Sony device other than it is a smartphone, it has Bluetooth 4.1 and it has a design name and model number of PRO20161112. Other rumors point to Sony releasing, or at least unveiling, a total of five new smartphones at the Mobile World Congress, being held in Barcelona towards the end of the month. These devices, which are said to come with a colorful codename each, range from a 5.0-inch, 720p model through a 5.5-inch, 1440p device. However, the new flagship Sony Xperia, under the model name of “Yoshino,” will come with a 5.5-inch, 4K or 2160p resolution display according to the rumors. The Sony Yoshino may use a similar resolution-managing technology as we’ve seen with the Sony Xperia Z5 Premium, that is, the device will ordinarily reduce the screen resolution in order to save battery life when there is no benefit to the user. The other new Sony Xperia models have code names of BlancBright, Hinoki, Keyaki and Mineo.

Given that the Sony Xperia PRO20161112 model has Bluetooth 4.1 rather than the new Bluetooth 5 standard, this particular device does not appear to be one based around the new Qualcomm Snapdragon 835 chipset, as this System-on-Chip supports the new Bluetooth 5 standard. Sony would be unlikely to release a 2017 flagship smartphone using the new Snapdragon flagship chip without adopting the very latest Bluetooth 5 standard. Indeed, Bluetooth 4.1 is not even the penultimate version of the networking technology, as some of today’s smartphones offer support for Bluetooth 4.2. As such, it seems logical that the Sony Xperia PRO20161112 is a lower to mid-range device, based around a lower to mid-range chipset.

Sony have used both MediaTek and Qualcomm chipsets in their recent Xperia devices, but there is no indication what flavor of chipset the model will use. It is possible that the Bluetooth SIG will be testing and certifying a number of other Sony Xperia smartphones, and if this is the case other supported versions of Bluetooth could be revealed perhaps along with additional information about these devices. However, until more details of Sony’s up and coming Xperia family of devices is unveiled, the world will need to wait until the MWC in Barcelona. 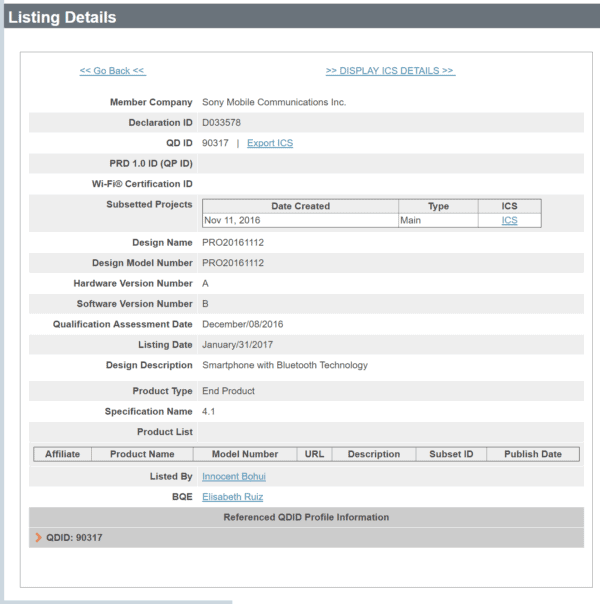