Google has now confirmed that the ticket application window for this year’s Google I/O event will begin at 10AM PST on February 22 and will wrap up on February 27 at 5PM PST. Which means that if you do want to attend Google I/O 2017, then this is the time in which you will want to apply for tickets. As is the case with Google’s I/O events in general, getting tickets can be a somewhat difficult and random process, so applying for one does not necessarily mean you will get one. Although, on the positive side, Google’s approach to ticket issuing is far less discriminatory, so anyone in particular does stand as good of a chance of being selected as anyone else. Google will not start selecting people until after the window closes and if you are lucky enough to be one of the randomly chosen, then Google notes that you should receive your ticket via email on February 28.

The event itself is due to take place this year from May 17 to May 19 and will be held at the Shoreline Amphitheatre in Mountain View, CA. This is the same location as where last year’s event took place. Back towards the end of 2016 it has been rumored that the this year’s event might return to Moscone West, where it had been held for a number of years prior to returning to the Shoreline Amphitheatre in Mountain View last year. Although, that particular rumor came to an end when Google revealed the date and location of this year’s event through their ‘Save The Date’ puzzle last month.

As per usual, the event will be filled with everything Google-related including some early insight into what can be expected going forward from Google, Android, and everything in-between. For those who are interested in making the trip to Mountain View, while you cannot currently register your interest in the event, the website does come with an ‘add to calendar’ option so that you can be sure to get a reminder when the ticket application window opens. For those less inclined to make use of the add to calendar feature, February 22 is the date you will want to remember and 10AM PST is the time. For those wondering, Google does note that the order of applications received has no bearing on the outcome. It is all just random. 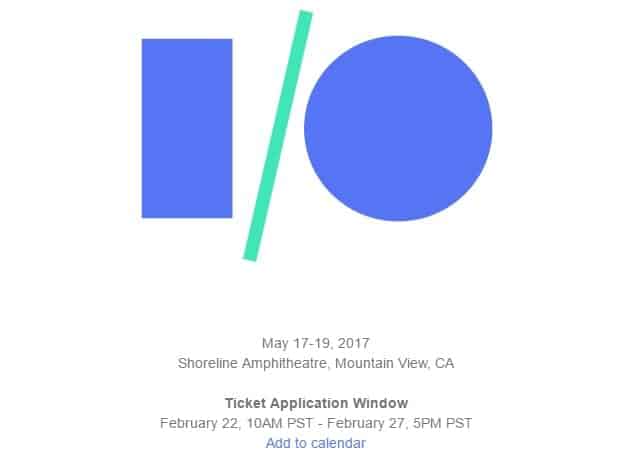