New benchmark results for the Snapdragon 835 (MSM8998) has just been listed on the Geekbench database, and it shows a marked improvement from the earlier results that had popped up on the website late last year. According to the latest listing, the upcoming high-end chipset from Qualcomm scores an impressive 2004 in the single-core test, while the multi-core score came in at 6233. Interestingly enough, the name of the test device is unavailable as of now, but according to the listing, it apparently had 4GB of RAM and was running Android 7.1.1 Nougat at the time of testing. The Snapdragon 835 will be Qualcomm's next high-end chip and, is expected to power a number of premium smartphones this year including the Galaxy S8 from Samsung and the Mi 6 from Xiaomi.

The new benchmark scores for Qualcomm's upcoming chip shows a significant improvement over the earlier results which reportedly came in at 1844 points for the single-core test and just 5426 points for the multi-core test. Those test results were published back in December, and was run on a test smartphone that was listed as 'Essential FIH-PM1'. It won't be too much of a stretch to say that Qualcomm must have used the past few weeks to tweak the chip to increase its performance, seeing as the earlier scores were criticized by many as being not enough of an improvement over the Snapdragon 821 benchmarks. Furthermore, Huawei's Kirin 960 chipset also managed to outscore those results by racking up 1949 points in single-core and 6439 points in multi-core tests.

While both the Snapdragon 835 and the Kirin 960 will have 64-bit octa-core CPUs in big.LITTLE configuration, there will be a few differences between the two. While the former is being built on a 10nm FinFET process by Samsung, the latter is manufactured using the 16nm process by TSMC. The Snapdragon 835 will come with a Kryo 280 CPU with a clock speed of up to 2.45GHz, although, the clock speed during the Geekbench test was apparently restricted to just 1.9GHz, as can be seen from the screenshot below. It will be accompanied by Qualcomm's very own Adreno 540 GPU that supports OpenGL ES 3.2, OpenCL 2.0, Vulkan API, as well as DirectX 12. As for the Kirn 960's octa-core CPU, it will have four powerful Cortex-A73 cores and four power-efficient Cortex-A53 cores, and will be complimented by ARM's new Bifrost GPU – the Mali-G71. 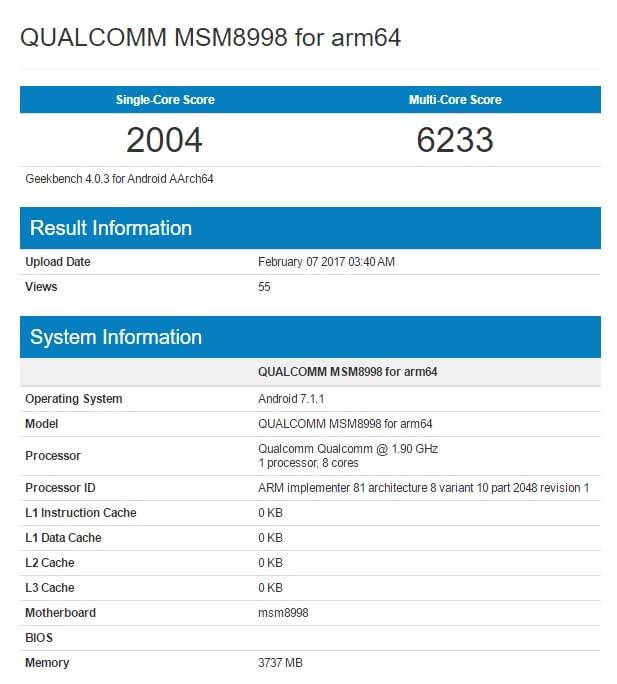