The latest beta version of the Signal Private Messenger app adds support for video calls and voice calls. Users can enable the experimental feature by navigating to the app's Settings menu, selecting the "Advanced" option and tapping the "Video calling beta" button on the next screen. Users who want to try out this feature will have to make sure that people they're trying to call are also running the latest beta version of Signal Private Messenger and have enabled the same setting. Finally, the experimental feature is currently available exclusively on Android devices, meaning you won't be able to call your contacts who are using iPhones until Open Whisper Systems introduces the same beta build on iOS. On the bright side, anyone can opt to participate in the Signal Private Messenger beta by clicking on the Google Play Store link below.

Signal Private Messenger developers are now asking users to try out the experimental feature and find the time to write some feedback, especially if they encounter any kind of bugs within the app. Note that the beta version of the app might not be perfectly stable, though no large issues with the latest beta build have been reported so far. There's still no word on when video and voice calls might make their way to the stable version of Signal Private Messenger, but seeing how Open Whisper Systems is already testing what seems to be a relatively stable feature, the release of this functionality could happen in the coming months, possibly by spring. Signal Private Messenger seems to be encrypting video and voice calls just like it encrypts regular text messages.

This release marks the latest step in Open Whisper Systems' development strategy of ennobling their popular instant messaging (IM) app with more useful features to attract more users and keep their old ones. Naturally, that isn't to say the studio isn't hard at work improving the overall security of Signal Private Messenger seeing how it's only been a few months since the app received support for encryption verification. All things considered, the app will likely receive more additional features in the near future. 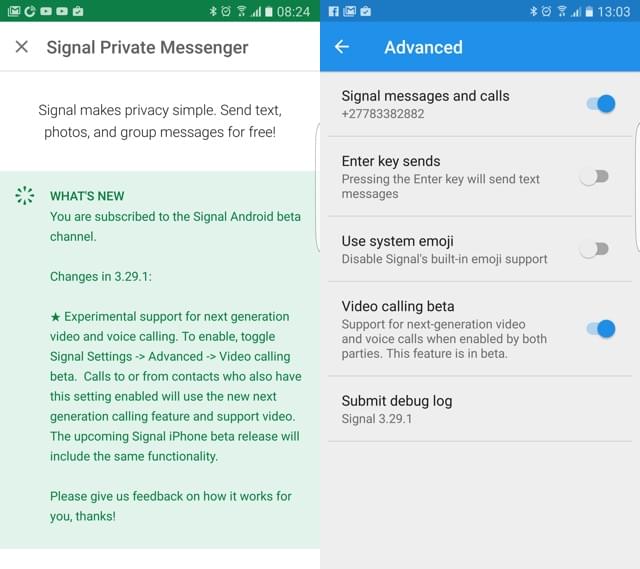