A new Galaxy-branded smartphone has just popped up on Geekbench. The Samsung SM-G615F surfaced, and chances are we’re looking at a new smartphone in the company’s ‘Galaxy On’ series of devices, though we’re only guessing at this point. In any case, we’re looking at a mid-range smartphone here, and thanks to Geekbench, we now have some spec info when it comes to the Samsung Galaxy SM-G615F, though it’s worth mentioning that this handset surfaced on GFXBench earlier today as well, read on.

According to Geekbench, this handset managed to hit 840 points in the single-core benchmark, while it scored 3,426 points in the multi-core test. Geekbench also reports that the device will ship with Android 7.0 Nougat out of the box, and that it will be fueled by the MT6757 64-bit octa-core SoC, which goes hand-in-hand to what GFXBench reported earlier today. In addition to all this, this phablet will come with 3GB of RAM on the inside. Now, GFXBench added plenty of more info today as well, we’re looking at a 5.7-inch phablet here, it comes with a fullHD (1920 x 1080) display, and this will, of course, be Samsung’s AMOLED panel. ARM’s Mali-T880 MP2 GPU will be here for graphics, and will work in collaboration with the aforementioned chip from MediaTek. This handset packs in 32GB of internal storage, while it will sport a 12-megapixel camera on the back, and it seems like a 12-megapixel shooter will be available on the front side of the device as well, though chances are that its rear-facing sensor will be far more capable than its selfie shooter. If GFXBench is to be believed, NFC will not be a part of the SM-G615F package, and the same can be said for a heart rate sensor.

Samsung had introduced a handful of ‘Galaxy On’ smartphones thus far, and the latest ones arrived back in September last year. The company had introduced the Galaxy On7 (2016) and Galaxy On8 (2016) back in September, and both of those devices are mid-range offerings by the company. Both of them ship with 5.5-inch displays, which means that the phone which surfaced on GFXBench would fit in nicely here, as it is somewhat larger than both the Galaxy On7 and Galaxy On8. If this is, in fact, a Galaxy On-branded device, then it would be the largest Galaxy On smartphone Samsung had ever introduced. It is still unknown when will Samsung announce the SM-G615F, but chances are it will land in the coming weeks, so stay tuned. 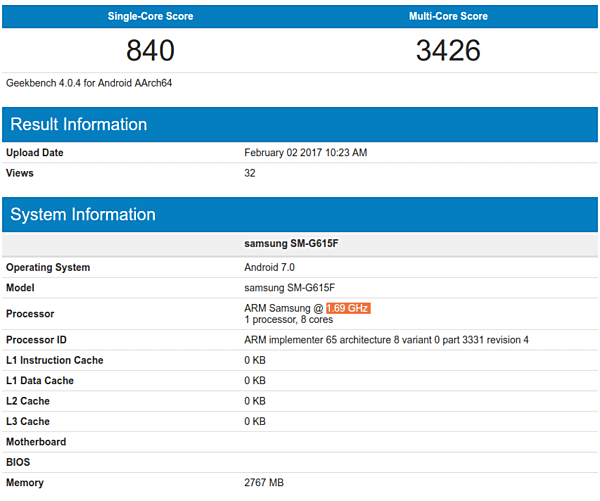