Samsung Electronics appears to be one step closer to making foldable mobile devices a reality, as the company seems to have recently applied for trademarking the “Samsung Galaxy X” moniker in South Korea. The Samsung Galaxy X brand has been previously attributed to one of the company’s rumored foldable smartphones, and the trademark application indicates that Samsung might be preparing for the smartphone’s eventual debut.

As seen in the screenshot below, Samsung Electronics filed for trademarking the “Samsung Galaxy X” brand at KIPRIS (Korea Intellectual Property Rights Information Service) on February 24, 2017. The application doesn’t reveal any details regarding the product’s specifications, but as mentioned previously, the Samsung Galaxy X moniker has been linked solely with previous rumors regarding the company’s plans for foldable smartphones. It’s also refreshing to see that the application is very recent given some of the previous rumors suggesting that Samsung Electronics might be putting its plans for foldable devices on-hold, following the commercial flop surrounding the Samsung Galaxy Note 7. Samsung had previously patented a variety of designs for foldable devices, some of which may not reflect a final product. However, a trademark application suggests that Samsung may have at least settled on the product’s final name for commercial release, and in turn, this might suggest that the so-called Samsung Galaxy X could be planned for a market launch in late 2017, or early 2018, as previously rumored. Then again, this could also be a way for Samsung to reserve the name for future use, whenever that may be, preventing other companies from calling dibs on the ‘Galaxy X’ brand.

The Samsung Galaxy X was previously known as Project Valley, and over the past couple of years or so, the South Korean company shared and patented a variety of concept designs depicting how the foldable screen technology might work in practice. The company has been researching and developing not only display technologies, but also special hinges and unique design elements required for a foldable mobile device. At the end of the day, however, the Samsung Galaxy X seems to be a product of the future – one that could stand next to the company’s flagship Samsung Galaxy S series and push the boundaries of smartphone design to new heights. 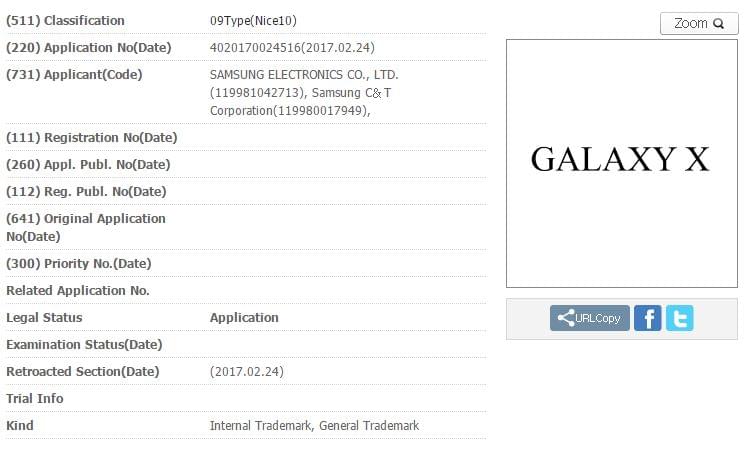