Skip to content
Advertisement
Trusted By Millions
Independent, Expert Android News You Can Trust, Since 2010
Publishing More Android Than Anyone Else
0
Today
42
This Week
225
This Month
2894
This Year
112957
All Time
Advertisement Samsung Flow – one of the most interesting features available on the Samsung Galaxy TabPro S tablet – is soon going to be usable on third-party Windows devices. By extending the availability of Samsung Flow on other Windows 10 machines, Samsung Galaxy owners will be able to unlock their Windows 10 computers using the fingerprint scanners embedded in their Samsung smartphones. Samsung Flow will reportedly expand its reach in April at the earliest, following the next major Windows 10 update.

Samsung Flow is described by the Korean tech giant as “a neat trick to unlock your PC” using the fingerprint reader on your Samsung Galaxy smartphone. At the time of writing the only Windows 10 machine supporting the feature is Samsung’s own Galaxy TabPro S tablet, but fortunately, it appears that Samsung did not overlook user feedback and as a result, the company has decided to open the application to the entirety of the Windows 10 platform. According to an official reply from Samsung to a Play Store user (image below), the change will take place after Microsoft releases its next major Windows 10 software update in April, and will allow Windows 10 users who happen to own one of the supported Samsung smartphones to unlock their PCs using their mobile fingerprint readers. Samsung Flow also gives users the ability to sync data between a mobile device and computer and enables incoming notifications on Windows 10 machines. As yet, the list of smartphones compatible with Samsung Flow includes the Samsung Galaxy S7 and Galaxy S7 Edge, the Samsung Galaxy S6 series including the Galaxy S6 Edge and Galaxy S6 Edge+, as well as the Samsung Galaxy Note 5 and the 2017 editions of the Samsung Galaxy A5 and Galaxy A7.

Given these upcoming changes, Samsung Flow could become a viable solution for eligible smartphone owners who don’t have a Windows 10 computer compatible with Windows Hello. Not unlike Samsung Flow, Windows Hello is a fairly new security feature giving Windows 10 users the option of unlocking their PCs through fingerprint scanners on devices like the Microsoft Surface Pro 4. However, without accounting for the latest generation of Windows 10 tablets and convertibles, fingerprint recognition sensors are not too widely spread in the world of personal computers, and Samsung Flow might bring that extra layer of security and convenience to a wider audience. 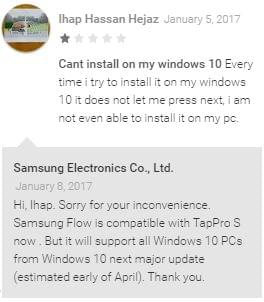