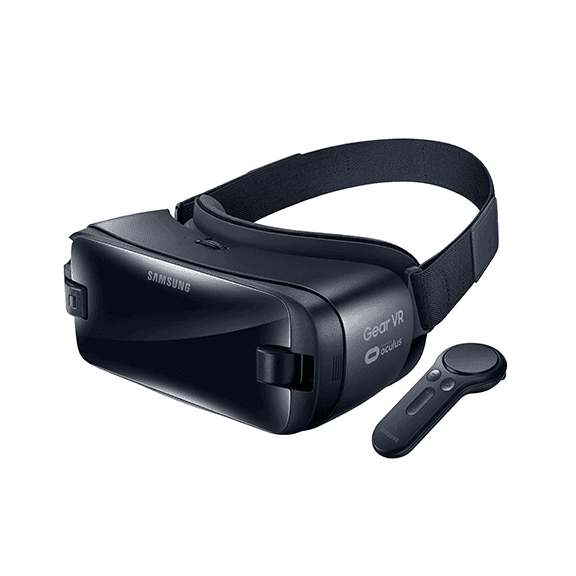 Samsung has unveiled a few new products at Mobile World Congress today. Among a few new tablets, the company is also debuting a new Gear VR headset which comes with a controller. Much like the Daydream View headset that Google debuted last fall. This new Gear VR is still powered by Oculus, so you’ll still get all of your favorite Oculus games and apps available on this new Gear VR headset.

The controller is really the news here for the new Gear VR. This controller is ergonomic and features a curved design, allowing the user to use the controller with one-hand, which makes it easy to play your favorite games. It also provides better motion interaction with minimized head movement, which makes for a more comfortable user experience overall. There are also Home, Volume and Back keys located on the controller which allows users to access everything they need, and stick to using the Gear VR for a long period of time, without being uncomfortable. The controller also features a secure grip, making it a bit more comfortable to play and use the Gear VR. There’s also a wrist strap included for the controller, so you won’t be throwing it across the room while playing a game.

A few other changes with this Gear VR is the fact that it offers 42mm lenses with 101-degree Field of View, along with advanced distortion correction technology. Now this is here to help minimize motion sickness, which is actually a pretty big issue when it comes to virtual reality, not just the Gear VR. Samsung also notes that this model does work with both micro USB and USB-C connectors. There is a converter for micro USB to USB-C in the box, so it will work with future devices (possibly hinting that the Galaxy S8 will have a USB-C connector, after the Galaxy Note 7 did). As far as compatibility goes, it currently still works with high-end Samsung devices, which include the Galaxy S6, Galaxy S6 Edge, Galaxy S6 Edge+, Galaxy Note 5, Galaxy S7, and Galaxy S7 Edge.