Samsung Display’s share of the active-matrix organic light-emitting diode (AMOLED) panel market will drop to 72 percent by 2020, according to a recent study conducted by market research firm UBI Research. Samsung Group’s panel-making division will hold approximately 89 percent of the AMOLED display panel market this year and its share will drop by five to six percentage points on an annual basis in the coming years, the study states. However, this forecast is actually a positive for the South Korean tech giant seeing how the AMOLED panel market is currently experiencing rapid growth, especially in terms of small panels used in smartphones and tablets. The 2017 OLED Display Annual Report authored by UBI Research explains how the AMOLED market for smartphones amounted to 374.4 million units in 2016 and will grow by almost 39 percent to 519.7 million this year. On average, the market will grow by close to 40 percent on an annual basis until 2020, meaning that while Samsung may lose some market share, the company will ship hundreds of millions of additional panels and significantly increase its revenue and profits.

Samsung Display is currently ahead of its competitors by both technology and production volume and while LG Display and Chinese panel makers are expected to start catching up to the Seoul-based tech giant in the coming years, the company will still maintain a massive lead, analysts believe. Naturally, Samsung is expected to continue committing resources to improving its manufacturing operations and technology in order to stay ahead of the competition. In related developments, recent rumors suggest that the company recently scored a huge supply deal with Apple that will see it ship 160 million OLED panels in total for the upcoming iPhone 8.

The findings published by UBI Research mostly coincide with a recent report claiming that virtually all 2017 flagships will use OLED display panels manufactured by Samsung Display. The company’s efforts to popularize OLED displays are directly related to its attempts to set a new standard for what’s considered to be a flagship smartphone panel seeing how Samsung is now reportedly pushing for curved screens in all high-end models. For example, both the Galaxy S8 and the Galaxy S8 Plus are rumored to ship with curved screens. 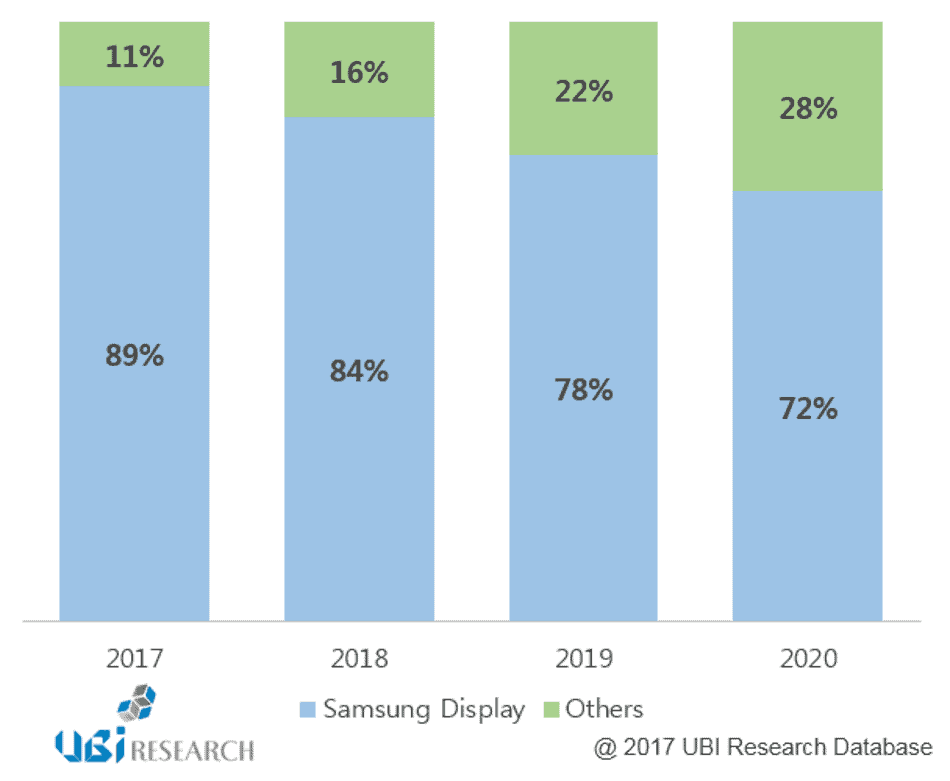