According to Strategy Analytics, Apple had managed to sell more smartphones than Samsung in the fourth quarter of last year, and the Galaxy Note 7 fiasco definitely helped Apple achieve that. According to the provided info, Apple had sold 78.3 million smartphones in the last quarter of 2016, while Samsung managed to sell slightly less, 77.5 million devices. So, as you can see, Apple is, once again, at the very top of the food chain, at least for now, we’ll see what happens at the end of Q1 2017.

Now, in addition to revealing smartphone shipments for both Apple and Samsung, Strategy Analytics also revealed other top 5 smartphone manufacturers, along with some info for the rest of the pack. Huawei is the third-largest smartphone manufacturer according to the source, as the company managed to ship 44.9 million smartphones in Q4 2016, and is followed by the likes of OPPO and Vivo, two China-based companies which had sold 29.5 and 25.6 million smartphones in that very same period, respectively. Now, if we look at percentages for Q4 2016 sales, Apple grabbed 17.8% of the market, while Samsung follows with 17.7%. Huawei stands at 10.2%, while OPPO and Vivo follow in fourth and fifth place with 6.7% and 5.8%, respectively.

The source also released some smartphone shipments info for 2016 in general, and according to that info, Samsung totally destroyed Apple. The Korea-based tech giant had sold 309.4 million smartphones last year, while Apple managed to sell ‘only’ 215.4 million. Huawei is third-placed on this list as well, as the China-based company sold 138.8 million devices in 2016. OPPO and Vivo have managed to ship 84.6 and 71.9 million smartphones, respectively. According to Strategy Analytics’ info, 1.488 billion smartphones were shipped last year in general, and the top 5 smartphone manufacturing companies shipped almost half of those. Smartphone manufacturers shipped more devices this year than they did in 2015 when the number was 1.440 billion. Another interesting thing worth mentioning here, is the fact that Samsung sold 10 million smartphones less in 2016, compared to 2015, while Apple shipped 16 million smartphones less compared to 2015. This is not all that surprising, though, mainly considering the fact that Chinese smartphone manufacturers are on the rise, especially Huawei, OPPO and Vivo. If you’d like to take a look at all the provided info, check out the image down below. 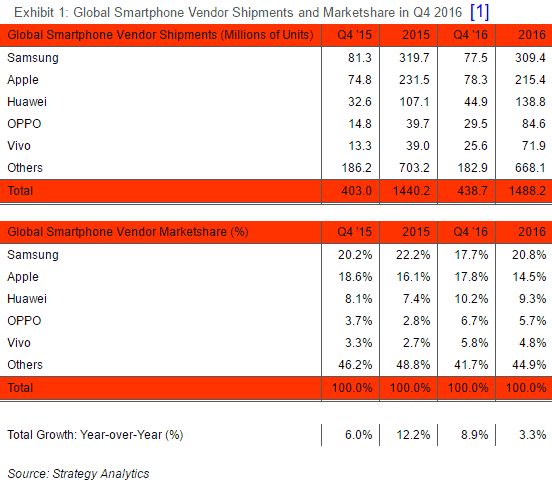