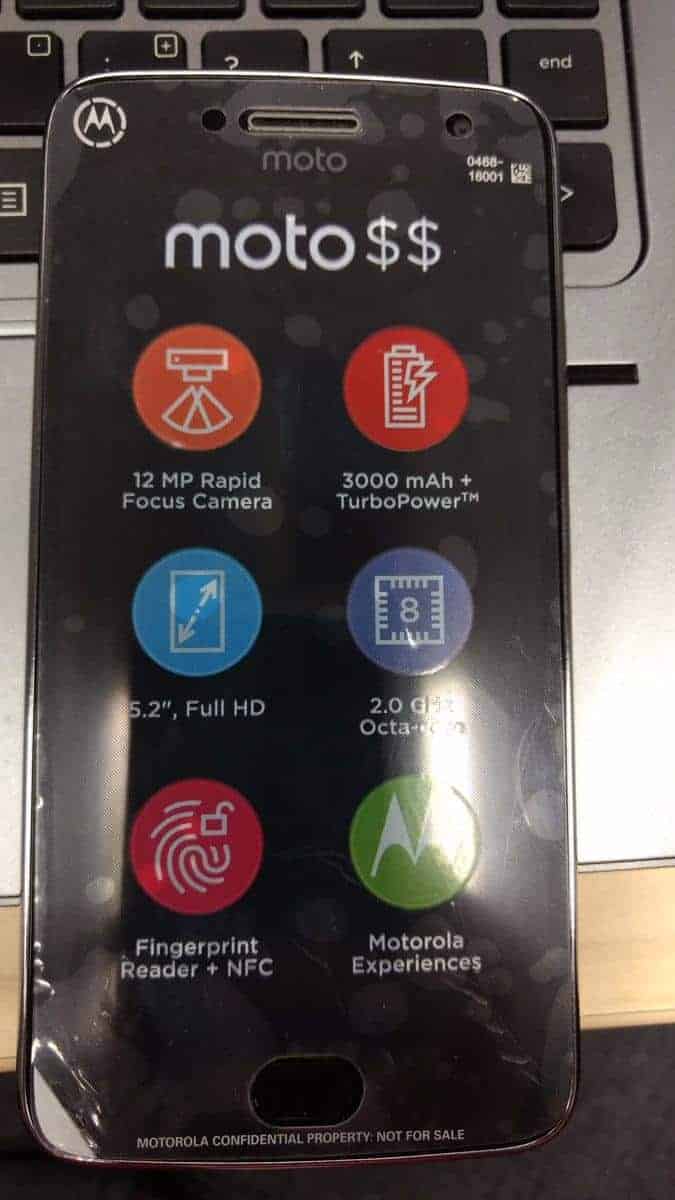 Yet another Moto G5 Plus image has just popped up online. This time around, the leaked image comes from Dan Cautella, as he shared this to ‘MOTO G4 e G4 PLUS Brasil’ page on Google+. Ronald Quandt, a well-known tipster, picked up this image and shared it with the general public via Twitter. This is a real life image of the device, as you can see, and along with it, we do get some spec info as well, thanks to a sticker that is placed on top of this smartphone’s display.

As you can see, this smartphone sports a home button below the display, though we still do not know if this is a physical key or a capacitive button, but it will probably act as a fingerprint scanner either way. If the spec info provided here is accurate, then you can expect the Moto G5 Plus to sport a 5.2-inch fullHD (1920 x 1080) display, along with a 3,000mAh battery, which will support TurboPower fast charging. An octa-core SoC will fuel this smartphone, and it will be clocked at 2.0GHz, and if previous rumors are accurate, then we’re looking at the Snapdragon 625 by Qualcomm. NFC will be a part of this package, and on the back of the phone, you’ll get a 12-megapixel camera with ‘Rapid Focus’. The ‘Moto’ branding is placed below the phone’s earpiece, as you can see in the provided image. The source also mentions that the provided Moto G5 Plus unit will ship with a DTV receiver, though it’s possible not all Moto G5 Plus units will get the DTV receiver, this feature could be exclusive to Brasil. On top of all this, Motorola Experiences will also be a part of this package, according to the leaked image.

Now, some of you might say that this info is wrong, as the Moto G5 Plus is expected to sport a 5.5-inch display. That might as well true, this information is not official or anything of the sort, so do take it with a grain of salt, as per usual. As far as other Moto G5 Plus specs are concerned, you can expect this smartphone to ship with Android Nougat, while we’ll also get some Moto apps on top of it.