Qualcomm has now introduced its latest LTE modem, the Qualcomm Snapdragon X20. The big selling point with this particular modem is that it comes with support for LTE Category 18 and has the ability to achieve download speeds of up to 1.2 Gbps. Making it an ideal solution for the onset of 5G. This is a seventh-generation LTE modem and the company’s second Gigabit LTE modem, following the Qualcomm Snapdragon X50 LTE modem which was first announced in the second half of last year. As part of today’s announcement. Qualcomm has also confirmed that the Snapdragon X20 LTE modem is already being sampled out to customers and Qualcomm expects the first commercial devices equipped with the Snapdragon X20 to arrive in the first half of next year, H1 2018.

The Snapdragon X20 LTE modem is built on a 10nm FinFET process and its 1.2 Gbps download speeds is achievable due to the modem’s ability to receive data from 12 streams simultaneously, with each stream individually able to obtain a peak throughput of 100 Mbps. According to Qualcomm, uplink speeds of up to 150 Mbps are also possible and this is achieved through the employment of 2x20MHz carrier aggregation, in addition to 64-QAM. This is also a modem which comes with vast cellular support and is listed to be compatible with LTE FDD, LTE TDD, WCDMA, TD-SCDMA, EV-DO, CDMA 1x, and GSM/EDGE, as well as more than 1000 carrier aggregation band combinations, and more. Although, where the X20 will likely be of most use is in the fact that it is able to offer Gigabit services, to more operators, and in more areas – due to its inclusion of wide support for not just licensed spectrum, but also unlicensed spectrum though Licensed Assisted Access (LAA) support. Which means operators with limited licensed spectrum will also be able to effectively offer and provide Gigabit Services in spite of limited licensed spectrum. This is also in addition to its shared spectrum support, which can help facilitate additional and specific use cases, like private LTE-based networks.

Qualcomm is quick to point out that the Snapdragon X20 LTE marks a number of firsts, and not just for the company, but for the industry as a whole. This is the first commercially-announced Gigabit LTE chipset to have the ability to deliver LTE Category 18 download speeds of up to 1.2 Gbps. As well as being the first modem to come with the already-mentioned support for a single-chip RF transceiver capable of 12-streams simultaneous LTE data reception. In a first for Snapdragon LTE modems, the Snapdragon X20 also supports integrated Dual SIM Dual VoLTE (DSDV). Which means that in addition to improved dual SIM functionality, the Snapdragon X20 LTE can also provide device users with for example, Ultra HD Voice on both device SIM ports – something that was largely only possible before on one of the SIM ports on a standard dual-SIM handset. Of course, this is all in addition to being able to adequately assist operators with additional data and speed-demanding use cases, such as virtual reality and 360-degree videos. Points which Qualcomm believe will place the company and the X20 modem in a prime position as OEMs and carriers begin launching Gigabit LTE networks and networks. Especially considering that in addition to its future-proofing 5G nature, the X20 is actually able to better cater to current 4G options as well. 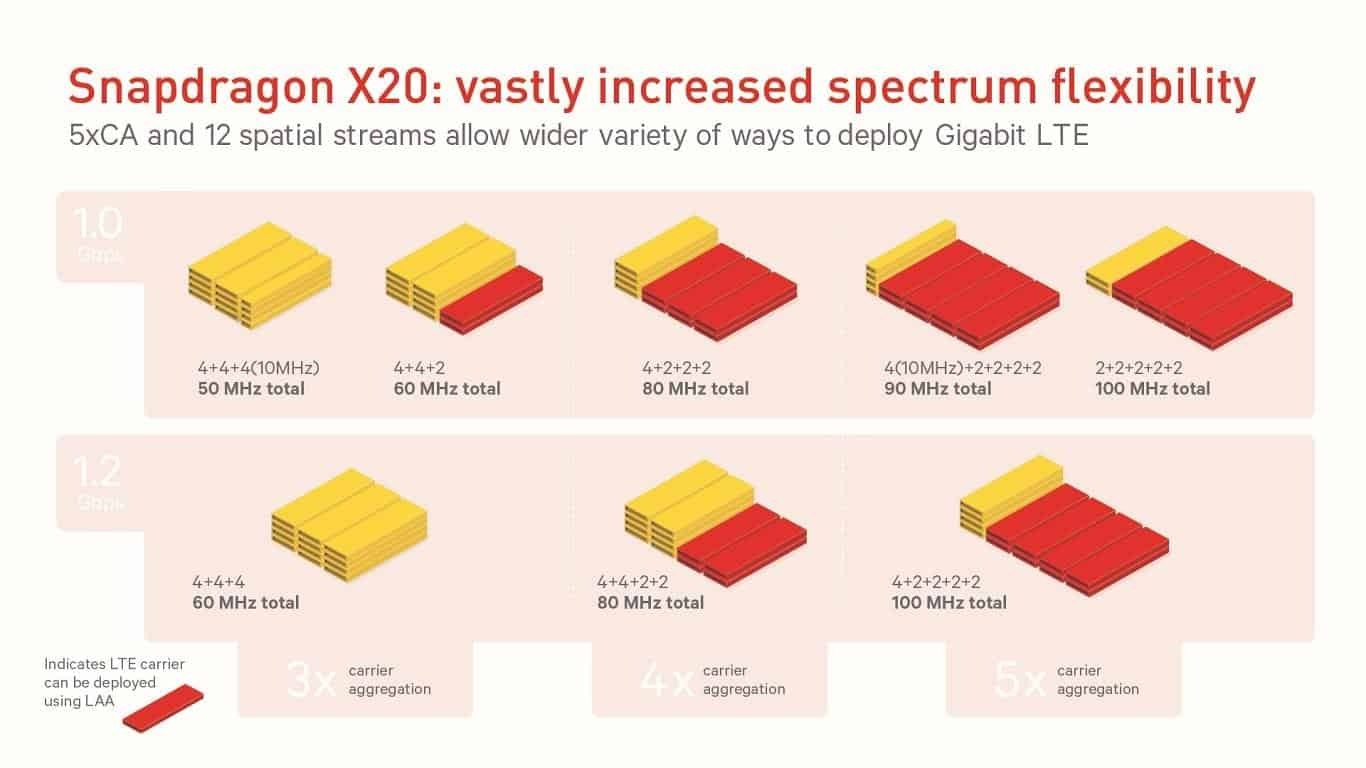