Google Assistant differs a good bit between Google Home and smartphones like the Google Pixel, although ‘Home Control‘ functionality for the Google Pixel and Google Pixel XL seeks to bridge that gap by allowing your phone to act as your home IoT hub. Home Control brings the ability to link up to supported smart devices in your home, just like Google Home can, and issue them commands via Google Assistant. For now, the list of supported brands is limited to Honeywell, Nest, Philips Hue, SmartThings, and WeMo, though you may be able to control more devices via the Join app, which can integrate Assistant with IFTTT and Tasker. There is no word at the moment on what the requirements are for the update, but it does seem as though Pixels running Android 7.1.2 (Nougat), are starting to see the functionality show up in the Google app.

The function allows users to set up devices and rooms to control by name with voice commands, again mirroring the functionality of Google Home. Users can set up voice commands for certain clusters of devices, such as turning on the lights in the main corridor or starting up music in the kitchen. While this does not entirely eliminate the need to buy a Google Home, it can patch up coverage for those with large homes where a Google Home unit can’t hear throughout, and can serve as a basic IoT hub for those without a Google Home.

While the implementation is rudimentary compared to Google Home at this point, Assistant’s contextual command function and the option to integrate with Tasker and IFTTT can make Home Control on the Pixel quite capable. Commands such as “turn on the hall lights”, followed by “turn on the music, too” could theoretically be created, as they could with Google Home. This feature has so far only been reported on the Google Pixel and Pixel XL, but may well appear on other phones that feature Assistant, both officially and unofficially, in the near future. In the meantime, if you own a Pixel or Pixel XL and would like to check out the new functionality, head to the Google app settings, then to the Google Assistant settings and you should see the ‘Home control’ tab listed, as shown below. 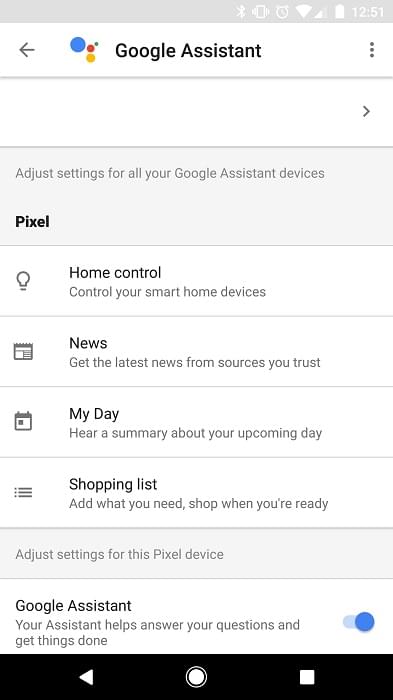