Do we have a good one for you today – The Samsung Galaxy S7 goes up against the Huawei Mate 9. The infamous glass-backed Galaxy S7, sharing Samsung’s flagship status with the Galaxy S7 Edge, goes up against the Mate 9 with its large display and all-metal backing. With the demise of the Galaxy Note 7, the almost year old Galaxy S7 is still hanging in there, but does it still have what it takes to go up against the newer Mate 9? The Huawei Mate 9 is their latest in phablet devices. Let’s look at just what these two devices have in common, if anything, and then we will take a closer look at each one in hopes that we can determine a winner of this comparison.

These two devices do have a few things in common, but one of them is not their physical size with displays close to an inch apart – the Galaxy S7 at 5.1-inch and the Mate 9 at 5.9 inches. Their displays use different technologies with the Galaxy S7 using an AMOLED display and the Mate 9 an IPS LCD display along with different resolutions. They both use different processors and GPUs made by different manufacturers. Both devices allow for memory expansion via a microSD card. The camera areas are both excellent, but they achieve that excellence with different sized lens and electronics. They both use larger, non-removable batteries and offer rapid charge capabilities. They both pack a fingerprint sensor for unlocking the device as well as authorizing mobile payments. They have the usual suspects – WiFi, Bluetooth v4.2, GPS, NFC, and the reversible Type-C port for charging and data transfer on the Mate 9 and the older microUSB v2.0 on the Galaxy S7. 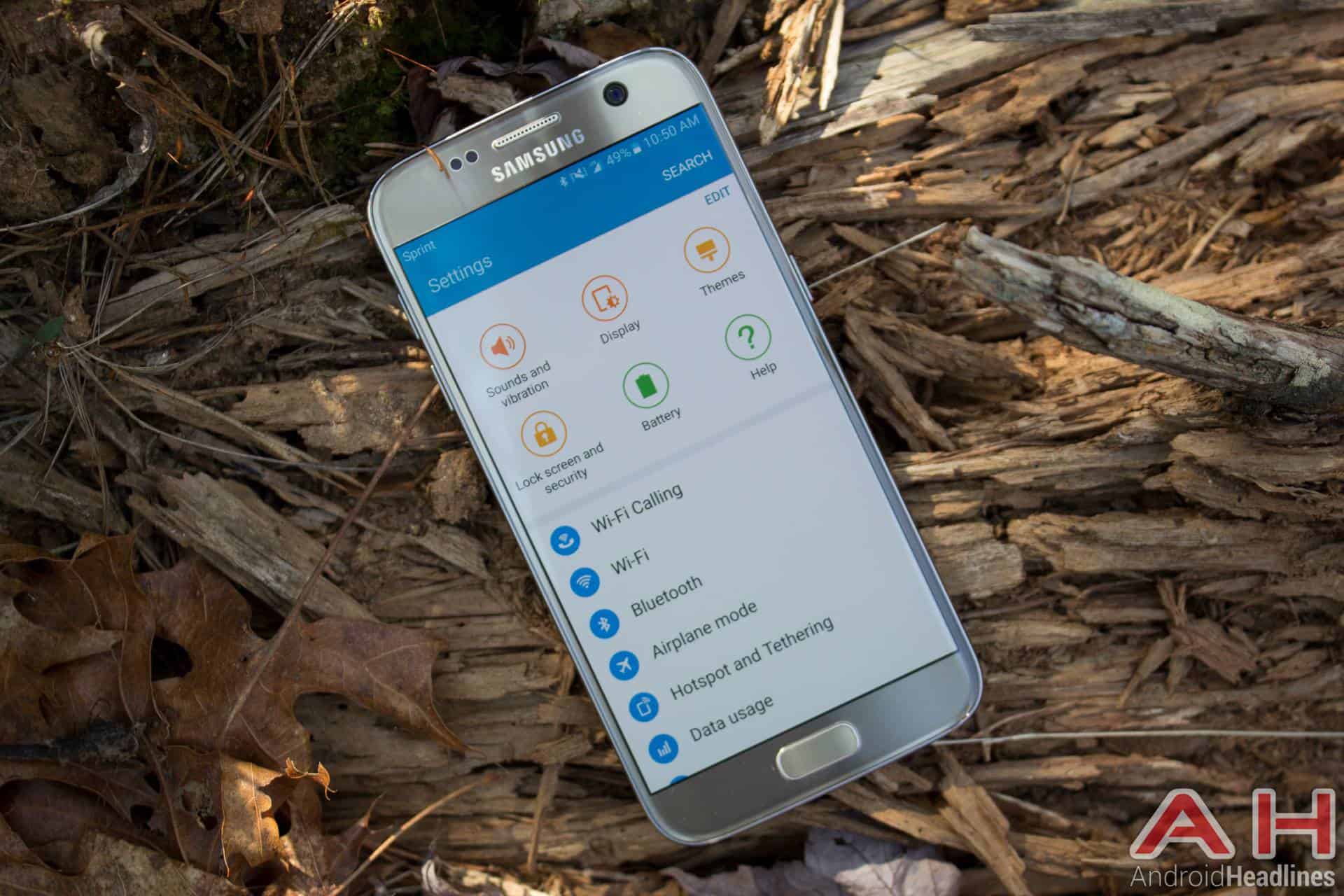 The Samsung Galaxy S7 was released close to one year ago. The Galaxy S7/S7 Edge outsold all other Android smartphones during 2016 and sales are still robust going into 2017. The Galaxy S7 continues the same exterior look of the Galaxy S6 – metal and glass construction but uses a much improved processor and camera on the inside. There were no big surprises upon the release of the S7. Of all places, the camera area was the only big surprise as we all expected to see a 21MP+ sensor; but instead, Samsung dialed it back to a Dual Pixel 12MP shooter.

The Galaxy S7 sports a 5.1-inch Super AMOLED QHD display with a resolution of 2560 x 1440 pixels and 577 pixels-per-inch (PPI.) The Galaxy S7 uses an ‘always-on’ screen to help save battery life and make checking notifications quicker and easier. In the US, it uses the popular Snapdragon 820 processor and an Adreno GPU. In other countries, the Galaxy S7 uses Samsung’s Exynos 8890 octa-core processor with four cores clocked at 1.6GHz and four cores clocked at 2.3GHz. 530 GPU. The Galaxy S7 packs 4GB of DDR4 RAM and has 32GB of the faster UFS 2.0 memory, as well as possible expansion up to 256GB via a microSD card.

The camera area is where Samsung surprised everybody by dropping the 16MP lenses found in the Galaxy S6 series and replacing it with a Dual Pixel 12MP rather than bumping it up to 21 or 23 megapixels. They continued making improvements to the camera by increasing the aperture to f/1.7, including a faster phase detection autofocus (PDAF), auto HDR and OIS. The Galaxy S7’s front-facing camera (FFC) includes a 5MP sensor, a wide-angle lens, the same f/1.7 aperture as the primary camera, and Live HDR that allows for excellent low-light selfies and video chatting. Samsung also increased the non-removable battery to 3000mAh, and it features Quick Charge 2.0 and offers Quick Wireless Charging.

The Samsung Galaxy S7 can use both Android Pay as well as Samsung Pay, which will allow Galaxy S7 users to make mobile purchases just about anywhere they can swipe a credit or debit card. The S7 has IP68 certification against dust and water; it sports a heart rate monitor and oxygen saturation sensor and High-Res audio for listening through earphones. The Galaxy S7 has gotten its Android Nougat 7.0 upgrade and measures 142.4 x 69.9 x 7.9 mm, weighs in at a svelte 152 grams, is available in Black, White, Gold, and Silver, and costs about $670, although the carriers are running frequent specials. 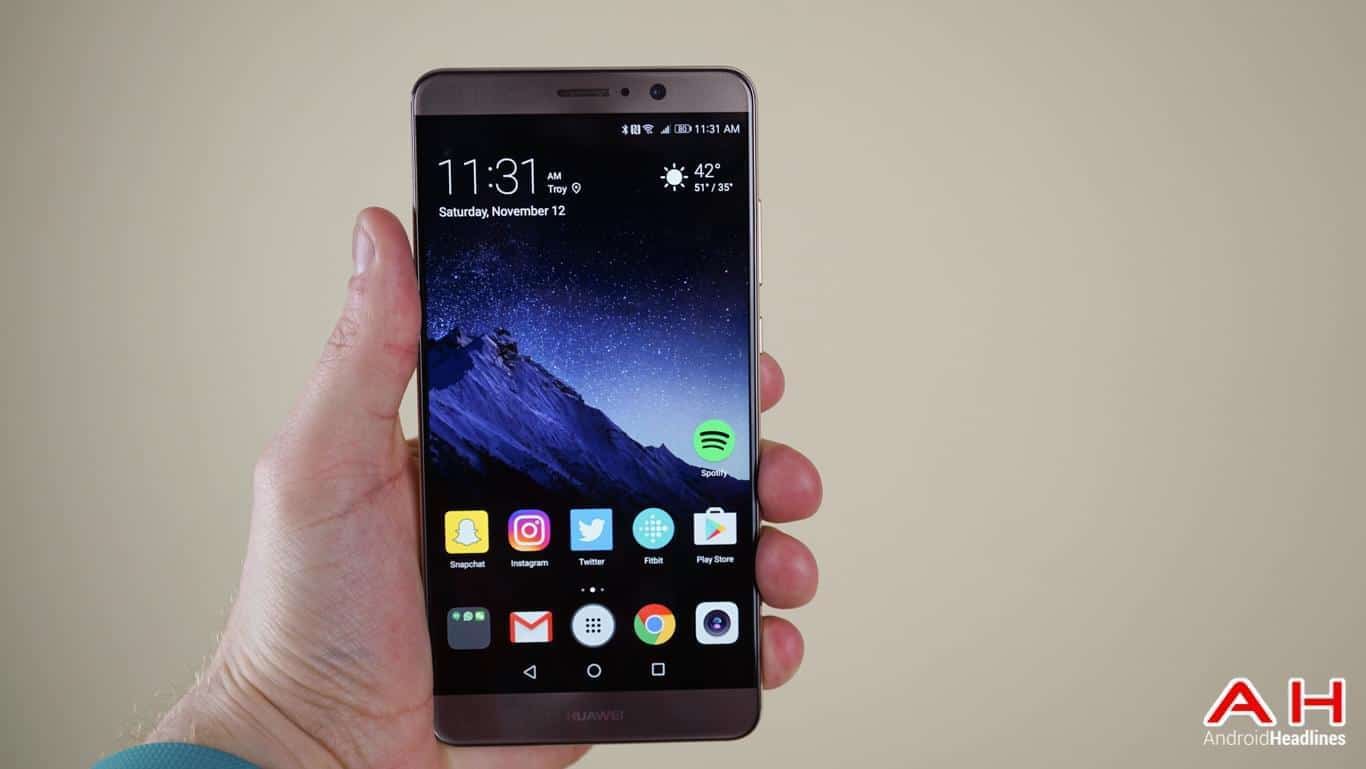 The new Huawei Mate 9 continues their tradition of a large 5.9-inch display with an FHD resolution to the letter. Even though the display is almost tablet-like, Huawei was able to keep the Mate 9 relatively compact by using small bezels and placing the fingerprint sensor on the back of the device. We are looking forward to the official US version on its way later this year that will work on all the major US carriers. It has an all-metal build and its slightly curved edges make it comfortable to hold for long periods. Let’s see just how it stacks up to the Galaxy S7.

The Huawei Mate 9 sports a phablet-size 5.9-inch IPS LCD FHD display with a resolution of only 1920 x 1080 pixels and 373 PPI due to its large screen. For the processor, they chose their powerful 64-bit Hisilicon Kirin 960 octa-core model with four cores running at 1.8GHz and four cores running at 2.4GHz. To handle even heavy-duty graphics, Huawei included their Mail-G71 MP8 GPU. The Mate 9 packs 4GB of DDR4 RAM and 64GB of expandable internal memory via a microSD card.

Huawei likes to include a good camera on their smartphones, and they did a great job with the Mate 9. Huawei not only used the infamous Leica brand, they include dual lenses – a 20MP sensor for colored photos and a 12MP sensor that shoots strictly monochrome (B&W) photos. With that type of pedigree, it was a surprise to see that Huawei used such a small aperture of f/2.2. However, they added OIS, 2X zoom, both PDAF and laser autofocus, and a dual-tone LED flash. Those that are into black and white photos can take advantage of the secondary lens and its software, giving it the ability to experiment with some great B&W shots. The Mate 9 uses an 8MP sensor on its FFC with a larger f/1.9 aperture and 26mm wide-angle lens for great selfies and video chatting. The Mate 9 packs a large 4000mAh non-removable battery along with Huawei’s SuperCharge to charge your battery from 0-100-percent in only 90 minutes.

When a display is as large as 5.9-inches, it would be nice to have a QHD resolution, but Huawei is more interested in saving battery life. While the Mate 9 incorporates dual speakers, Huawei did not include any Hi-Fi circuitry to enhance their sound. The Mate 9 has a rear-facing fingerprint sensor to unlock the device or authorize mobile payments, including Android Pay. The Mate 9 is running Android 7.0 Nougat out of the box, so there is no waiting for that update. The Mate 9 measures 156.9 x 78.9 x 7.9mm, weighs in at 190 grams and comes in Space Gray, Moonlight Silver, Champagne Gold, Mocha Brown, Ceramic White, and Black. Its pricing is about $600.

This was a relatively easy decision considering these two devices are in the same ballpark when it comes to pricing – especially when you consider the great deals on the Galaxy S7. Both devices are worthy contenders, but the Galaxy S7 has the better overall specifications as well.

The Galaxy S7 does give you a  smaller display – there is no arguing that point – but the display uses a Quad HD resolution and has the 'always-on' technology, which it makes it so easy to view your notifications or even the time and date without having to turn on the main display. It has a great processor/GPU, quick wireless charging, allows the use to participate in Samsung Pay purchases, and provides the IP68 water and dust protection. Samsung also includes the heart rate monitor and oxygen saturation sensor.

The Huawei Mate 9 offers a large FHD display, impressive camera area, and an IR Blaster. If you demand a large display or like the dual camera setup, then the Mate 9 may be exactly what you are looking for – but if you want a solid and proven daily driver, then the Galaxy S7 is for you.

Advertisement
Trusted By Millions
Independent, Expert Android News You Can Trust, Since 2010
Publishing More Android Than Anyone Else
15
Today
49
This Week
590
This Month.
590
This Year
110751
All Time
Advertisement