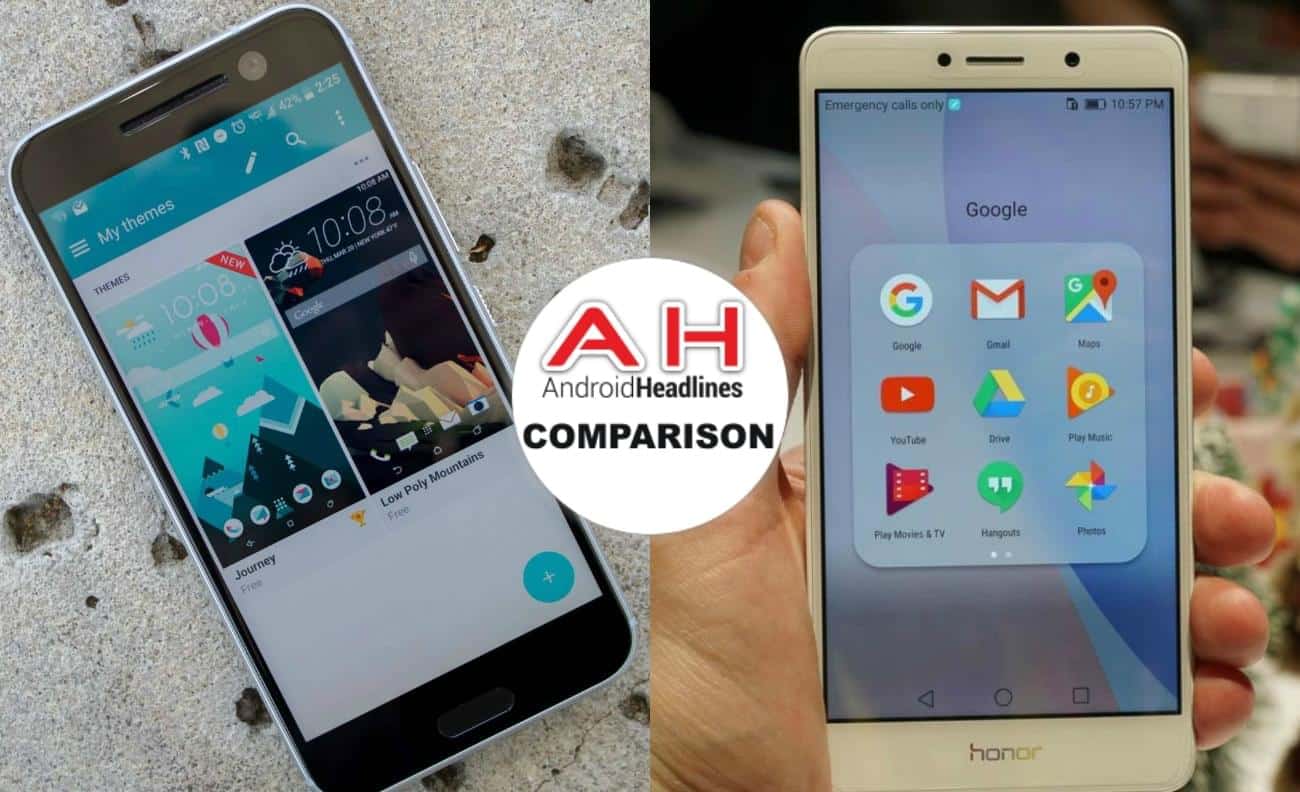 Do we have a good one for you today – The HTC 10 goes up against the new Honor 6X. Both devices use an all-metal design that HTC pioneered a few years back with their HTC One M7. Although the HTC 10 has been available since May 2016, it is still their flagship model until its replacement is available this spring. Although both use an all-metal design, the nod in the looks department would have to go to the HTC 10, while the Honor 6X has a more mainstream look. Let’s look at just what these two devices have in common, if anything, and then we will take a closer look at each one in hopes that we can determine a winner of this comparison.

With displays, only .3 of an inch apart – 5.2-inches for the HTC 10 and 5.5-inches for the Honor 6X – their physical dimensions are close with the Honor 6X only slightly larger and weighing only 1 gram heavier. Both displays use the same LCD technology, but different resolutions. Both came running Android Marshmallow, but the HTC 10 has received its upgrade to Android Nougat while the Honor 6X has a planned Nougat upgrade. The two devices offer a 32GB version, and both offer expandable memory via a microSD card. Both devices offer great primary camera areas but go about it in a different way with the Honor 6X using a dual camera. The HTC 10 and Honor 6X both have Hi-Fi audio built-in, and they both have a decent sized, non-removable battery with the HTC 10 offering rapid charging capabilities. They both employ a fingerprint sensor for unlocking the device, but only the HTC 10 has NFC for authorizing mobile payments. The usual suspects are here – WiFi, Bluetooth (v4.2 on the HTC and v4.1 on the Honor 6X), GPS, and a reversible Type-C port for charging and data transfer on the HTC 10 and the older microUSB v2.0 on the Honor 6X.

There is no doubt that the HTC 10 is their best model to date yet still has trouble racking up sales figures. HTC started the trend for all-metal phones with their One M7, however, by the time they released the One M9, users thought the design was getting a little out-of-date. The HTC 10 came to us as a new bold design and included all the right high-end specs – a QHD display, the best processor, terrific sound, and finally a great camera making it a complete package. Let’s see just how well it stacks up to the new Huawei Honor 6X.

The HTC 10 sports a 5.2-inch Super LCD5 QHD display with a resolution of 2560 x 1440 pixels and 565 pixels-per-inch (PPI). HTC took the best processor available to them at the time by choosing the Qualcomm Snapdragon 820 quad-core with dual cores clocked at 1.6 GHz and dual cores clocked at 2.15 GHz and the Adreno 530 GPU for superior graphics. The HTC 10 is packing 4GB of the DDR4 RAM and a base 32GB of expandable internal memory up to 256GB via a microSD card.

You have to give HTC some credit for trying new ideas when it came to the camera area, but nothing ever really worked. On the HTC 10, they finally got all of the right pieces working well together – a 12MP sensor with its UltraPixel 2 for capturing more light and image, and then added laser autofocus, a dual-tone LED flash, a large aperture of f/1.8 and OIS. For the front-facing camera (FFC) HTC used a 5MP sensor, with the same large f/1.8 aperture, a wide-angle lens, OIS, and an on-screen flash to ensure excellent low-light selfies and video chatting. Powering the device is a 3000mAh non-removable battery that it uses Qualcomm’s Quick Charge 3.0.

To accommodate the addition of the front-facing fingerprint sensor HTC had to reconstruct their infamous BoomSound. The ‘low-end’ sounds come from the speaker located on the bottom of the device, and the high-end sounds originate from the earpiece. HTC renamed it to BoomSound Hi-Fi to differentiate it from their original BoomSound. HTC also included Hi-Fi circuitry for great sounding music for your earphones. The HTC 10 measures 145.9 x 71.9 x 9 mm and weighs in at 161 grams. It comes in Carbon Grey, Topaz Gold, and Glacier Silver and it will cost you about $650 with 32GB of memory, although look for discounts as the new model should be here soon. 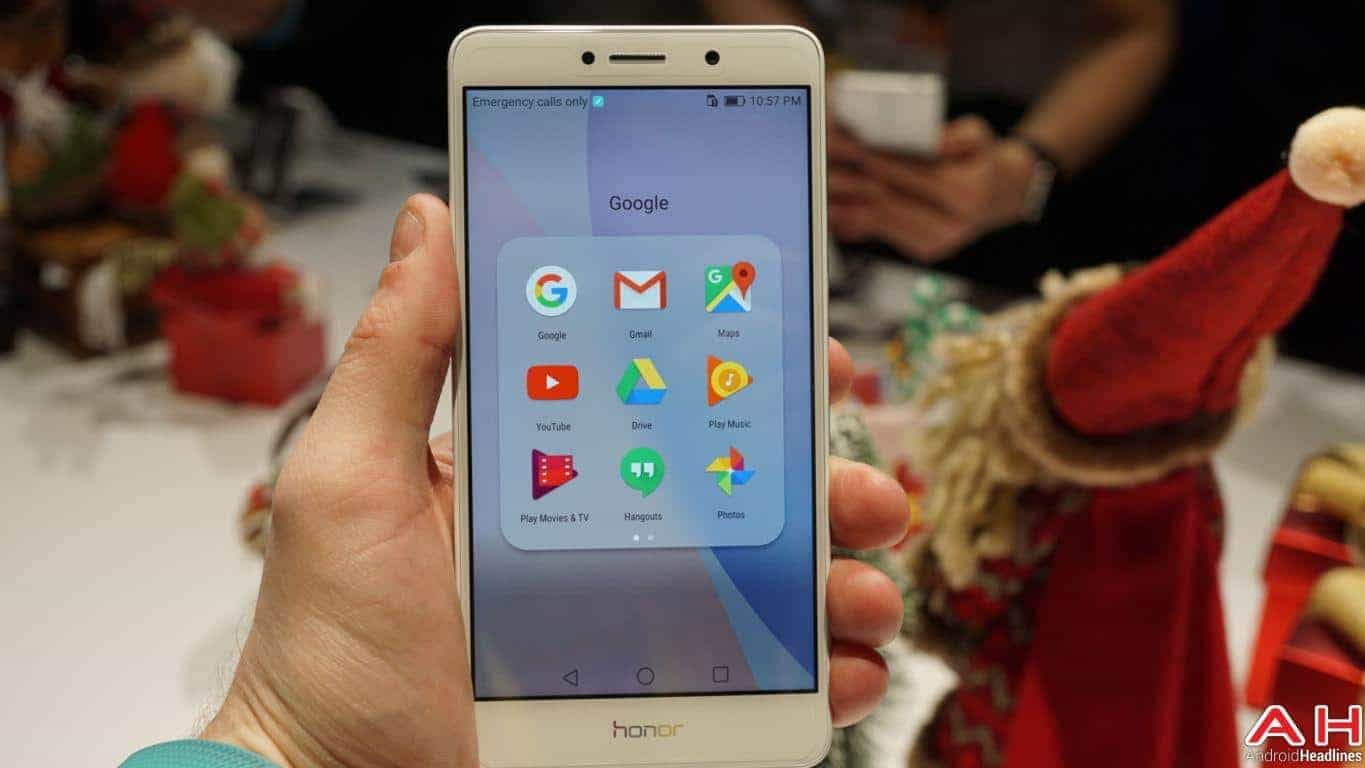 Huawei puts out devices with good specs at a reasonable price, and the mid-range Honor 6X continues in this direction. There is a 3GB/32GB model that will cost only $250, and the 4GB/64GB model will run you a mere $299. For the most part, it is a solid metal design, although you will find small pieces of plastic at the top and bottom to allow for better reception. Huawei rounded corners and used 2.D-curved glass that pairs up nicely with the curved sides to make it a pleasure to hold. Considering this is a mid-range device under $300, it is unusual to find dual cameras on the Honor 6X. Let’s see how it stacks up to the more expensive HTC 10.

The Honor 6X sports a 5.5-inch IPS LCD Full HD display, giving it a resolution of 1920 x 1080 pixels and 403 PPI. Huawei went with their HiSilicon Kirin 655 octa-core processor in the Honor 6X that has four cores clocked at 1.7GHz and four cores clocked at 2.1GHz. They teamed that to their Mali-T830MP2 GPU as part of the package to handle the graphics. The base Honor 6X packs 3GB of RAM and offers 32GB of expandable internal memory via a microSD card, but Huawei says to look for a 4GB/64GB option coming soon.

Huawei was able to include a dual camera setup in the Honor 6X that is a bit unusual. The primary camera is a 12MP, but only uses a 2MP secondary camera to deliver what Huawei says is a “professional-grade bokeh effect.” It comes with Phase Detection Autofocus (PDAF), a LED flash, and can take some decent pictures. The FFC is a rather large 8MP lens for selfies and video chatting. The Honor 6X uses a large 3340mAh non-removable battery that takes about 2 hours to charge.

Despite the Honor 6X’s small price tag, it has an excellent build quality and good looks. It comes with a rear fingerprint sensor for unlocking the device, but it lacks an NFC chip, so no mobile banking or Android Pay is possible. The Honor 6X does include a filter for the display’s blue light to prevent eye fatigue. It measures 150.9 x 76.2 x 8.2mm, weighs in at 162 grams, and comes in Gray, Gold, and Silver. Pricing is about $250 for the 3GB/32GB model and only $300 for the upcoming 4GB/64GB model. It comes with Android 6.0 Marshmallow with a planned upgrade to Android 7.0 Nougat, although Huawei is not known for their upgrade speed. The Honor 6X is a GSM device so that it will function only on AT&T or T-Mobile in the US.

I had to pick the HTC 10 as the winner of this comparison – it is by far the more advanced of the two devices, although there is a much higher price to pay.

The Honor 6X is a buy at $250 and if you are okay with the AT&T or T-Mobile network, willing to give up mobile payments, Android Pay, processing power, use an FHD display, and a slow charging battery, then the $250 Honor 6X may be the phone for you or if you have to buy those first phones for the kids.

The HTC 10 has a better display, better processor, and GPU, more RAM, a better overall camera, nicer build, better sound, Quick Charge for the battery, and can work on all of the major US networks. It does list for about $650, but discounts can be found, especially as it comes close to a year old.