Nokia has announced that they are working on what they are calling WING, a Worldwide IoT Network Grid. The project combines multiple connections, like cellular, satellite, and Wi-Fi, to create a worldwide network with nearly gapless coverage all over the map. These network connections are unified, managed, and optimized through Nokia's proprietary IMPACT IoT platform, allowing them to sell the network to customers as a service. The backend of the network is all on Nokia's end, while user devices are managed through e-SIM technology. Nokia will manage the network, distribute network resources, maximize coverage, and provide security through their IMPACT platform.

Nokia's platform will allow dynamic management of resources for all sorts of IoT applications across all sorts of connection types. With the IoT standards war still raging, Nokia's bid to unify and simplify IoT is in itself a game-changer, but through their equipment and licenses, they are seeking to deploy a worldwide IoT network that could potentially be scaled out to become the end-all, be-all of IoT networks and standards, covering the majority of IoT devices worldwide. Thanks to full-service management offered through the subscription service, Nokia's WING would be a fuss-free way for enterprise bodies to cover their entire IoT infrastructure. Nokia specifically named health, transport, and utilities as three possible markets, but more uses are obviously possible.

Each customer will get their own small slice of network to use as a sort of IoT fleet intranet, managed by an individual Nokia Cloud Packet Core node. While it may not be feasible for consumers to buy into this network directly for the time being, future improvements could conceivably bring the price and implementation cost down. In the mean time, consumers will still be able to reap the benefits of Nokia's new WING technology in the form of the companies they get products and services from signing up and rolling out new services faster and cheaper than they've previously been able to. Nokia's network technologies which serve a huge number of cellular networks, as well as the IMPACT platform that Nokia plans to run their WING network on have both won numerous awards in the past. Nokia has yet to announce exactly when their network will go live. 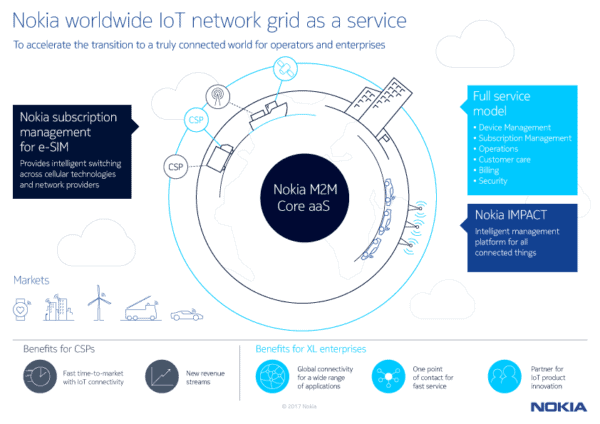