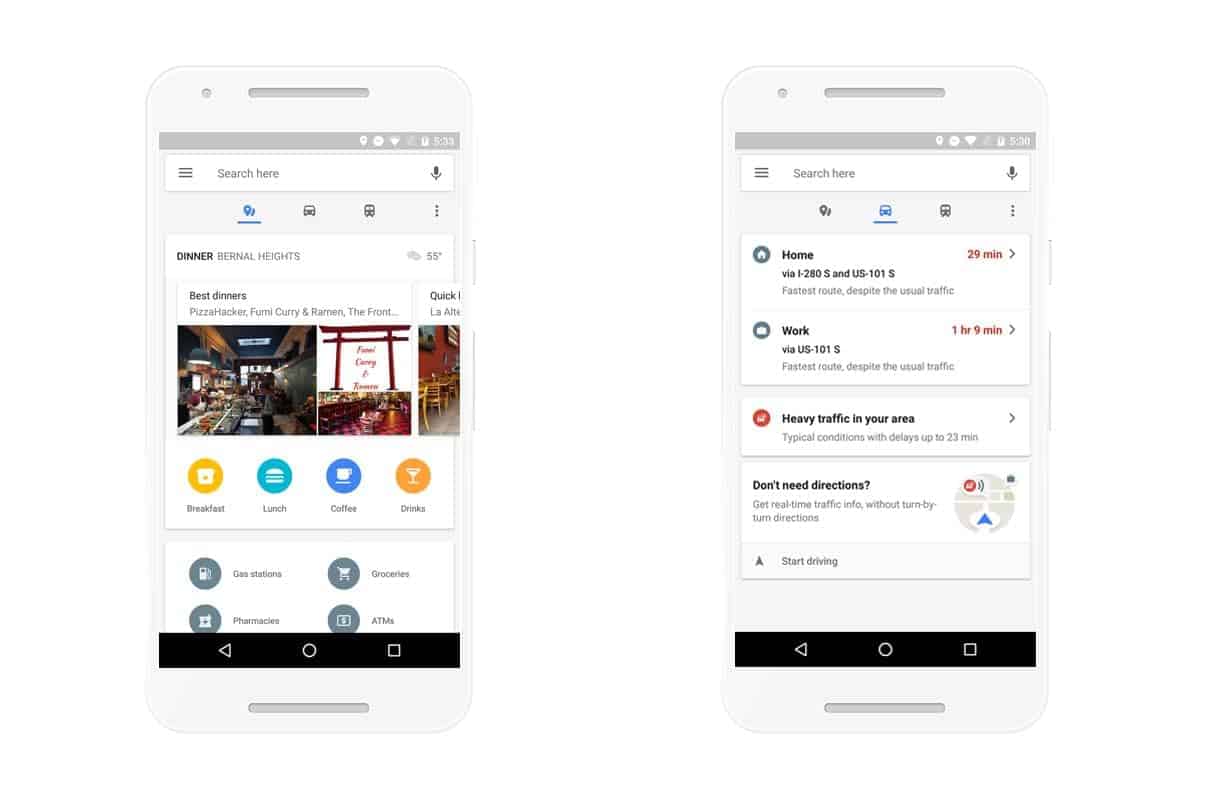 The latest Google Maps update adds a number of new features to the company's popular navigation app, including a new way to access real-time information designed to help you commute to work and just get around more easily. This new functionality can be accessed by swiping up from the bottom of the Google Maps home screen which will bring up a new window boasting three tabs dedicated to Places, Driving, and Transit menus. The Places tab will provide you with a list of nearby locations where food and drinks are served, as revealed by Marcus Lowe, the Product Manager at Google Maps. This one-tap list is curated and can sort locations by keywords like "romantic dining" and "cheap dinners." Another tap will allow you to search for curated lists of other potentially useful locations like gas stations, clinics, and ATMs. All of the listings feature a description and at least one photo of the location they're suggesting, meaning you can quickly inspect potential areas of interest in just a few taps directly from the Google Maps app.

As its name suggests, the Transit tab was designed to provide you with public transit options and make suggestions based on where you are and what time it is. In addition to providing you with route schedules, the tab also displays an estimated time of arrival for each individual ride. Note that you need to provide Google Maps with your home and work address in order to get this feature to work. However, you can also use the Transit tab to navigate to another location by simply swiping down on the tab and looking at transit stations in your vicinity. The Driving tab works in a similar manner and needs to have access to both your home and work addresses but can be used to navigate busy city streets and estimate one's time of arrival regardless of their destination. The gallery below showcases the new one-tap tabs in action.

Lowe said that the latest update was designed to make Google Maps more useful to people who rely on the app on a regular basis. The Mountain View-based tech giant has recently been hard at work introducing new features to its navigation app and more convenient Google Maps functionalities are bound to follow shortly.

Advertisement
Advertisement
Trusted By Millions
Independent, Expert Android News You Can Trust, Since 2010
Publishing More Android Than Anyone Else
32
Today
150
This Week
70
This Month
4058
This Year
105535
All Time
Advertisement