MediaTek has just released some more info regarding their new processor, the Helio P25. This is a 64-bit octa-core processor, and it belongs amongst the company’s other mid-range chips. MediaTek actually announced this SoC back in September last year, but back then, the company did not release that many details about this chip. Well, this time around we do get plenty of new info, and this SoC is aimed to be used in really thin smartphones which sport dual camera setups, read on.

This is an octa-core processor, as already mentioned, it comes with either ARM Cortex-A53 cores, and it is clocked at 2.5GHz, which makes it faster than the Helio P20 which is running at 2.3GHz. This processor comes with the ARM Mali-T880 dual GPU which is clocked at 900MHz, and it offers support for Category 6 LTE, while it also supports up to 6GB of LPDDR4x RAM. “MediaTek Helio P25 puts advanced camera effects at user fingertips, including shallow depth-of-field – typically associated more expensive lenses – and high-performance auto exposure that lets users capture the highest quality images in any lighting scenario,” said MediaTek, so it’s kind of obvious that the company optimized this chip for camera performance. The Helio P25 is made using TSMC’s 16nm manufacturing process, and it comes with MediaTek’s Imagiq Image Signal Processor (ISP), which you can also find in the Helio P20, but unlike the ISP in the Helio P20, this ISP supports dual setup cameras (13-megapixel camera at the very max). In addition to that, this ISP is optimized for color + mono de-noise, and also real-time shallow DoF bokeh and video HDR with full preview, in case you were wondering. On top of all that, the Helio P25 comes with high-performance auto exposure, in other words, you’re getting ‘Turbo 3A’ which will accelerate AE convergence speed by 30-55%, according to MediaTek.

First Helio P25-powered smartphones will probably become available by the end of Q1 2017, though we still don’t know when exactly. If you’d like to take a closer look at the comparison between the Helio P20 and Helio P25, along with some more Helio P25 details, check out the image down below. 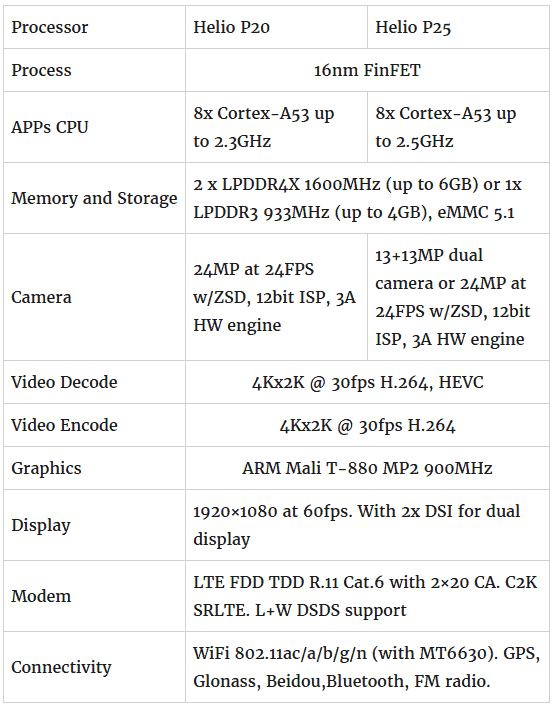