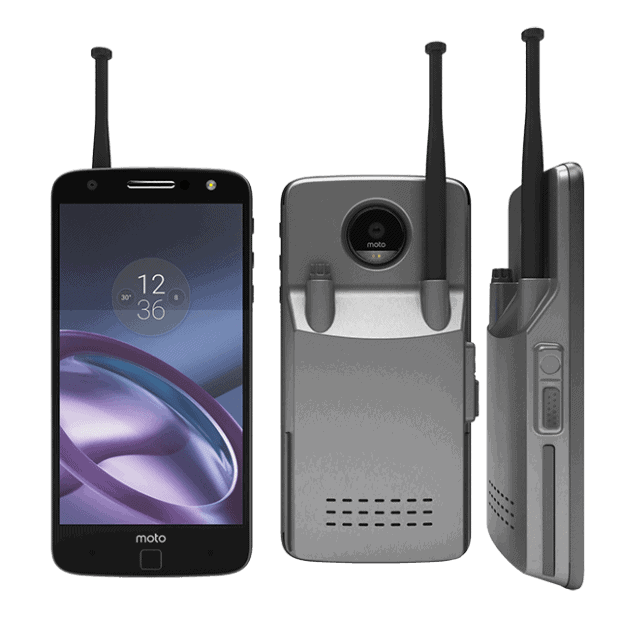 LINC is a smart walkie talkie Moto Mod for the Moto Z family of devices and it's currently on indiegogo seeking funding. LINC is among the few that have come out of Motorola and Lenovo's contest that tasked companies and anyone who felt they had a shot to create a unique and compelling Moto Mod accessory to be used for the Moto Z, with others like the Edge Moto Mod being another popular option that has gained traction. The difference between something like Edge, which simply adds colored LED's to the edges of your device to alert you to notifications and integrate with other app features, and LINC, is that LINC seeks to provide a functionality that is aimed at helping you stay connected even when you actually have no connection.

Since this is a walkie talkie, its goal is to allow you to keep in touch when you don't have connection to a cellular network. It boasts a range of up to five miles so there are limitations to it, as you can't exactly expect to talk to someone from across the country if you lose connection to the nearest tower. That being said, there might be times where you and someone else happen to not only lose connection but also lose sight of each other, and this is where the LINC Moto Mod could be useful.

While attached to the phone users can connect LINC to the companion app and easily share their GPS location as well as access their SMS messages without a cellular connection, and it comes in a slim design that fits along with the style of the Moto Z which is thin as well ensuring that it won't bulk up your phone too much. When it comes to the radio portion, LINC will work across FRS and GMRS with a total of 22 channels between the two of them, giving users a fair number of channels to use for communication. LINC is durable too as it's dust and water resistant, and it has a rechargable 1,500mAh battery inside of it that should be able to last users for up to 20 hours on standby. While the device itself isn't for sale right now, those interested in backing it can expect to receive one by December of 2017 according to the funding page, with a cost starting at $159 which provides one LINC walkie talkie mod. There are 21 days left on this project and it has reached about 16% of its $12,000 goal.