Sprint has now revealed that the newly announced LG G6 will be joining its network as the provider’s first High-Performance User Equipment (HPUE) capable device. The announcement was made via the Sprint News account on twitter, @sprintnews, on February 26 and also promises “more details” will be revealed soon. HPUE is an idea that Sprint helped put forward and which it announced in December of last year. It effectively takes advantage of the company’s huge allotment of licensed 2.5 GHz spectrum in order to close a gap between the carrier’s mid-band and low-band spectrum. This means that HPUE devices gain many advantages of the company’s 1.9 GHz spectrum, without a compromise in speed or data capacity. In short, HPUE devices will achieve very high data speeds and over a greater range than other LTE devices.

The news breaks as Sprint is demoing future advancements to its 4G LTE network environment at MWC and the LG G6 will be the first device ever to take advantage of the innovative ideas behind HPUE. Meanwhile, Sprint is expected continue revealing more and more details about advantages and advancements to its LTE-TDD network over the coming days. It is possible that the tweet’s teased “more details” will be revealed during that time. Over the next year, the company is also expected to begin proper testing of a gigabit network within the United States, and that newly bolstered network may be a key part of the LG G6’s HPUE capabilities.

Although some features of LG’s newest flagship – such as wireless charging, Hi-Fidelity audio, and high-capacity storage – are set to be region-locked, the fact that it is capable of taking advantage of Sprint’s TDD offerings will be a big plus for users on that network. It translates, in turn, to a far superior signal when used indoors and over a wider area for users of the device on Sprint’s network. It is not yet known whether any other US carriers will be able to take the internals of LG’s newest flagship to provide a similarly enhanced network experience. However, HPUE is also a worldwide initiative and more devices that meet the standards to be classified as HPUE-capable should follow. 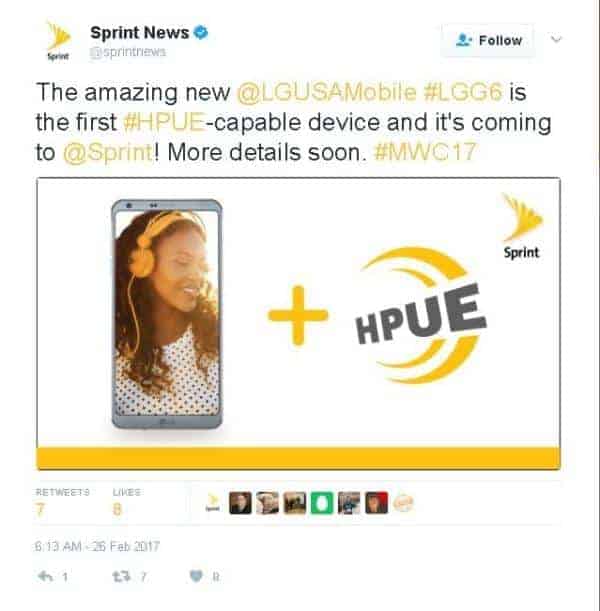