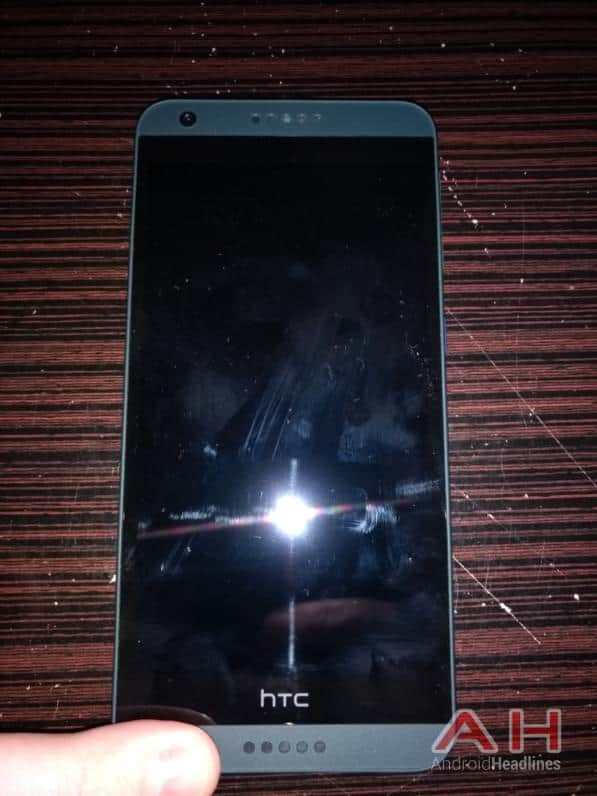 HTC's Desire 650 for Cricket has leaked in real life images, following a leak from earlier this morning showing the phone off from the front and the back in what looks like a promotional render. The more recent leaked images of the actual device being used were sent in by an anonymous tipster who not only provided a picture of the front and back of the phone, but also a few screenshots which showcase different details about the device software and hardware.

While the earlier leak about the Desire 650 stated that the device came with Android 6.0 Marshmallow software installed out of the box, the person who sent in these images claims to be a beta dev for HTC who is testing the Desire 650, and mentions that the software running on this device is actually Android 7.0 Nougat. One of the screenshots provided seems to display the use of Android 7.0 Nougat software, which would suggest that once the device actually launches on Cricket's network that it will come with Nougat and not Marshmallow as previously thought. This is good news for device owners who pick up the Desire 650 once available as they won't have to worry about software updates to move up to the most recent version of the Android platform.

Another key detail which was rumored from the earlier leak is that the HTC Desire 650 comes with a 13-megapixel rear-facing camera, but according to one of the screenshots which shows the results from an AnTuTu benchmark the phone appears to come with an 8-megapixel camera on the back instead. It's mentioned by the user who sent in the images that the phone is packed with pre-installed software which takes up a good chunk of space from the phone's internal storage. They also note that usability in every day use was slow, but also mention that battery life was pretty decent even though the phone comes with a smaller battery, which according to previous details is said to be a 2200mAh battery inside of the device. While the device is already available in Taiwan following the Desire 650's initial announcement last year, back in January of 2017 a rumor suggests that HTC plans to have the Desire 650 set for an international release sometime this month. Whether or not Cricket's model of the device would launch around the same time is unclear but if beta dev units are being tested in the real world then a launch may not be far off.