The HTC 11 has just surfaced yet again, well, its specifications did. This is the company’s upcoming flagship, at least according to rumors, and if today’s leak is to be believed, the HTC 11 will be quite a powerful smartphone. This information comes from Weibo (Chinese social network), and if you take a look at the image down below, you’ll get to see HTC 11’s alleged ‘About Phone’ page which shares some of HTC 11’s specs with the general public, read on.

If this leak is to be believed, the HTC 11 will sport a display with a resolution of 2550 x 1556 pixels, though this image does not reveal how large will that display be. Qualcomm’s Snapdragon 835 64-bit octa-core processor will fuel this smartphone, and the company’s HTC Sense 9.0 UI will come installed on top of Android Nougat. This smartphone will also ship with 6GB of RAM and 128GB of internal storage. If this info is to be believed. Interestingly enough, the listing does not mention Android 7.0 Nougat or Android 7.1 Nougat, but Android 7.1.2 Nougat. So, as you can, these are high-end specifications. Now, if you take a closer at the display resolution that we’ve mentioned above, you’ll notice that it’s rather weird, regular QHD resolution is 2560 x 1440 pixels, and HTC 11’s resolution seems to be 2550 x 1556 pixels. So, why is that? Well, this resolution could hint at a curved display, though it could also suggest that we’re looking at a different aspect ratio here, with or without the curved display part.

As you probably already know, HTC had introduced a high-end smartphone not long ago, the HTC U Ultra. That handset is fueled by the Snapdragon 821 64-bit quad-core processor, which is Qualcomm’s flagship SoC for 2016. Now, the Snapdragon 835 was introduced during CES 2017 which took place last month, but it seems like Samsung plans on snatching the whole first batch of Snapdragon 835 CPUs in order to utilize them in their Galaxy S8 SoCs. This could mean that the HTC 11 will launch later than expected, but we’ll see what will happen, as nothing has been confirmed just yet. 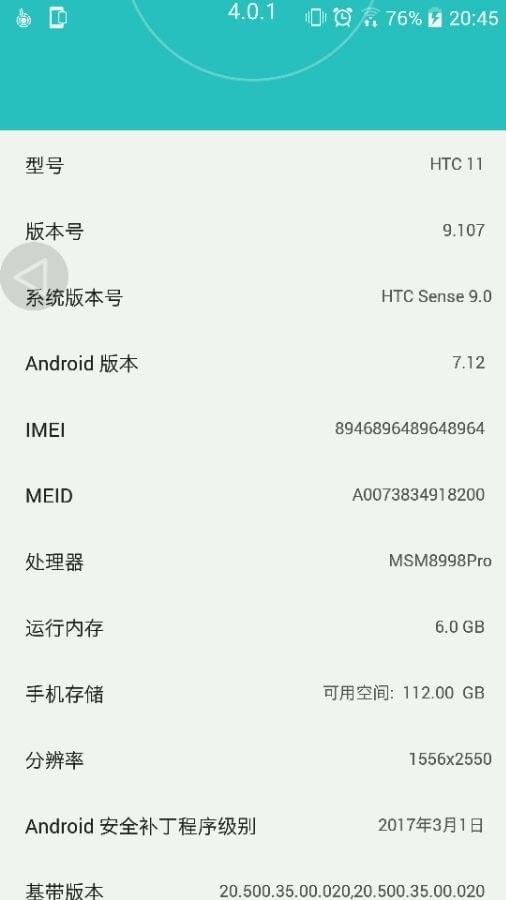