The Android 7.0 Nougat update for HTC 10 units in Europe is now available for flashing. This comes after the Product and Service Director for HTC EMEA, Graham Wheeler posted a tweet with a How-To guide to flash Android 7.0 Nougat on the HTC 10. However, this only applies to countries in mainland Europe, though Wheeler urges users in the Netherlands to wait for the OTA update. According to Wheeler, the engineering team at HTC has found an issue with the Dutch version of Android 7.0 Nougat, though the specific issue wasn’t disclosed.

It should also be noted that you will need to be currently using an unlocked HTC 10 unit if you would like to flash Android 7.0 Nougat onto your device. Before flashing, it is always best to backup all data on your device as the flashing process will wipe all data off of your device. If you haven’t flashed a device before, it is best to wait for the OTA update, which is expected to be rolled out in the coming days. Wheeler also stated that the Taiwanese company is making the update available via the flashing method as it was suggested by a user. The Android 7.0 Nougat update for the HTC 10 in Europe initially started rolling out a couple of weeks back. However, after a few days, Wheeler announced on Twitter that it will be temporarily paused due to technical issues, though he didn’t dive into the details. The rollout was also temporarily halted in early January due to persistent bugs, though it resumed not too long after that.

If you are currently using the HTC 10 but haven’t received the jump to Android 7.0 Nougat yet, you may refer to the image below and simply follow the directions given. Do read the instructions thoroughly before proceeding with the flashing process. The HTC 10 is the current flagship smartphone of the Taiwanese firm and it will be likely be replaced by the HTC 11 later this year, though the release date for the upcoming device hasn’t been revealed yet. However, HTC recently launched the HTC U Ultra, a smartphone with flagship specs, though HTC has stated that the device is not a flagship device from the company. 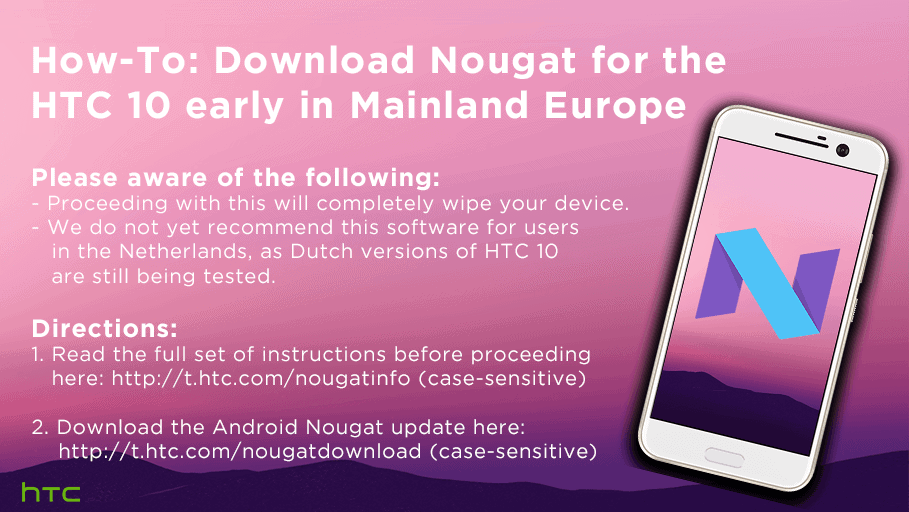