Google is looking to streamline the speed of finding Google Drive located files on your smartphone, as the company has today announced that following a new update to the Google Drive app, users will be able to view files located in Drive, directly in the Google app search results. Google notes this has been made possible through the use of Firebase app indexing, which allows already-installed apps to be indexed by Google Search. As such, anyone looking to quickly find a certain file located within their Google Drive, can simply open the Google app, search for the file in question and then click on the “In App” tab that appears at the top of the page. Tapping here will bring up results from within apps, including within Google Drive.

Arguable, this might not be necessarily that much quicker than opening the Drive app to begin with and searching for the same file. However, the assumption here is that Google is making it easier to find a specific file, regardless of where it is located. So for instance, if you are less sure of where a specific file is located (in Gmail, in Drive, or elsewhere), then having to go to Drive first, check, then check elsewhere, you can simply just search using the Google app and have all the results come back to you. At which point clicking on the results will open the file in the correct and corresponding app, including Google Drive.

Google has announced that the update is already in the process of rolling out and therefore you should see it arrive on your device in due course. Google does note that this is a gradual rollout which mean that the full completion of the rolling out could take up to (and even longer) than three days, so all users might not see the update immediately, although they will see it eventually. Likewise, the feature is only listed to be dependent on a Google Drive update, so whether the Google app also needs to be updated, currently remains to be seen. Although, based on the announcement from Google, presumed not. 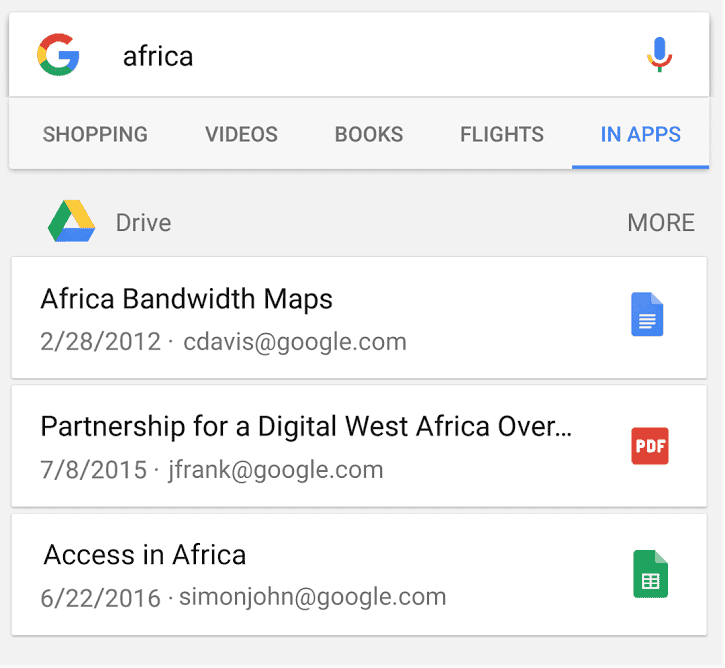