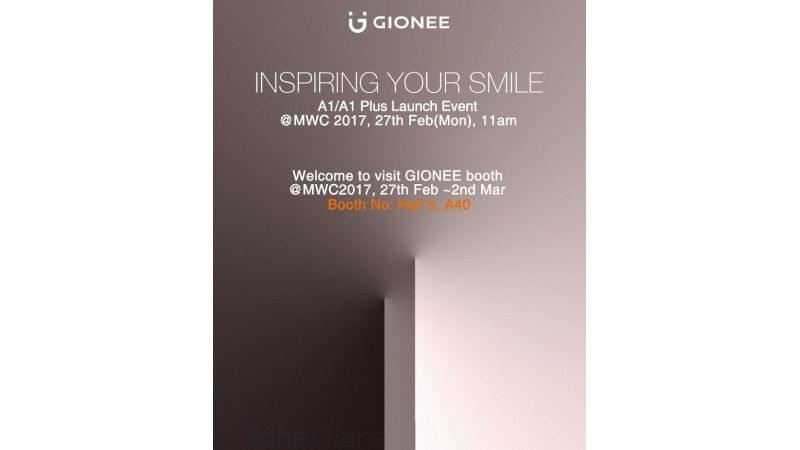 Chinese tech company Gionee has started sending out invites for its February 27th press conference at Mobile World Congress 2017. The company is expected to launch its A1 and A1 Plus smartphones at the event, which will start at 11AM CET on the aforementioned date, as can be seen from the image above. Both these devices are expected to be mid-rangers if recent leaks are anything to go by. While the Gionee A1 rumored to come with a price-tag of around $335, there’s no word currently on the pricing of the Gionee A1 Plus. Meanwhile, recent leaks seem to suggest that the Gionee A1 will be a selfie-focused smartphone with a 16-megapixel front-facing camera and a selfie-flash.

Taking a look at some of the other rumored hardware specs of the upcoming device, it will apparently feature a 5.5-inch 1080p display panel with 2.5D curved glass on top. The device is also expected to be powered by an unspecified MediaTek SoC with an integrated octa-core CPU clocked at a maximum frequency of 1.8GHz. The device is also expected to pack 4GB of RAM and 64GB of internal storage. What’s more, the device is expected to come with a microSD slot that supports cards of up to 128GB in capacity. Imaging options on the Gionee A1 should include a 13-megapixel rear-facing camera with LED flash, while the aforementioned 16-megapixel front-facing camera should be able to take well-lit selfies in low-light conditions, thanks to the presence of the selfie-flash.

The rest of the rumored hardware spec-sheet seems to be in line with what one would expect from mid-range smartphones circa 2017. That includes a fingerprint scanner on the back, a physical Home button on the front and a 4,010mAh battery on the inside with support for fast charging. Information about availability is yet to surface, but it shouldn’t be too long before more details about the upcoming devices are in public domain. Either way, one thing to remember here is that these hardware specs are being rumored for the Gionee A1. There’s no info currently about the Gionee A1 Plus, so it will be interesting to see if detailed hardware specs of that particular device will also pop-up before its scheduled unveiling at the end of this month.