Harman Kardon’s upcoming voice-activated speaker seems to be getting closer to its market debut as the device was certified by the Wi-Fi Alliance on Tuesday. Harman Kardon’s first voice-activated speaker is expected to be powered by Microsoft's Cortana artificial intelligence (AI) assistant, and sure enough, the device is identified by the model number "Cortana" in the Wi-Fi Alliance database, confirming that Harman Kardon is one of Microsoft’s early device partners for the Cortana Devices SDK platform.

Harman Kardon’s intentions to manufacture a smart speaker were confirmed last December when Microsoft announced that it will open Cortana to third-party software and hardware developers. At that time, Microsoft and Harman Kardon published a video dubbed “Premium Audio Meets Personal Assistant” that you can see below which briefly previews the upcoming Cortana-powered speaker that's "coming in 2017." Having said that, the product is now seemingly going through the necessary formalities with regulatory agencies ahead of its market release, and the Wi-Fi Alliance seems to be its first stop. The Wi-Fi Alliance refers to the speaker as "Harman Kardon with Cortana" and places the product in the "Digital Audio – Stationary (speakers, receiver, MP3 player)" category. Unfortunately, no other hardware or compatibility details have been revealed, but gadget enthusiasts who have previous experience with other smart speakers like Amazon's Echo and Google Home should have a general idea of what they can expect from Harman Kardon with Cortana. However, it remains to be seen whether or not Harman Kardon’s smart speaker powered by Cortana will perform better than the competition.

Given the vague 2017 launch timeframe, it's hard to tell when Harman Kardon with Cortana will become available for purchase, but given the Wi-Fi certification at hand, there is a chance that the product will be officially unveiled later this week or early next week at Mobile World Congress in Barcelona, Spain. It’s also worth mentioning that Harman International Industries will soon have a new owner as Samsung Electronics announced its $8 billion purchase of the company last October and is now in the process of completing that transaction following all of the necessary regulatory approvals in the United States and South Korea. 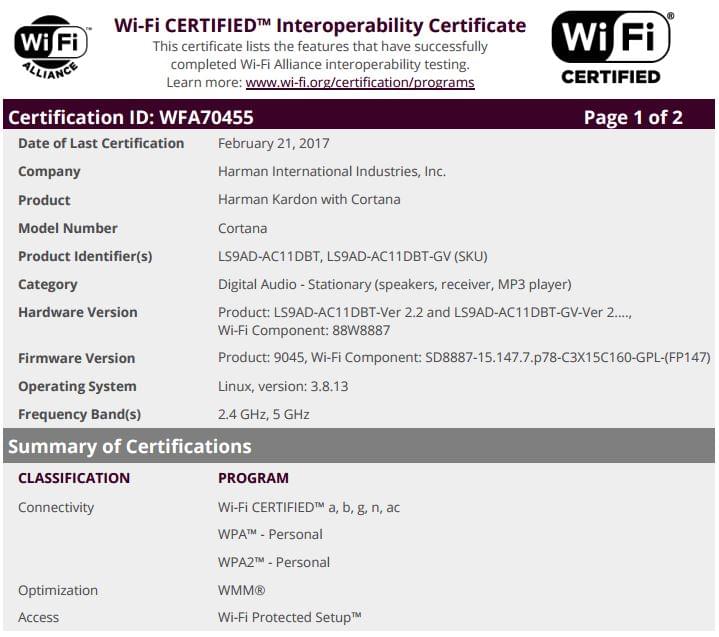