The latest smartphone in Lenovo’s Moto Z lineup, the Moto Z Play, is now getting its update to Android 7.0 Nougat around the world. Users from various countries have reportedly been receiving an update bringing their Moto Z Play smartphone up to the latest version of Android. This comes just a few days after the company began rolling out the update to the unlocked version of the Moto Z. The update weighs in at just over a gigabyte in size (1121.1MB to be exact). As expected, it’s a large update, so you’ll want to be on WiFi before downloading the update so that you don’t go over your data limit.

There isn’t a huge changelog with this update, as the software on the Moto Z Play is mostly AOSP, but users will be seeing enhanced notifications and quick settings. As well as a better version of Doze for better standby time out of their battery, so that users will see even better battery life. Additionally, there are some new data usage limit features available, so that users can limit data usage on their device, on a per-app basis. Making it easier to limit data usage and not go over your limit. Of course, there are loads of under-the-hood changes included in Android 7.0 Nougat, which will be making their way to the Moto Z Play, and it should theoretically make the device even better, from a user standpoint.

The update is currently rolling out, and is likely rolling out in stages, so we should be seeing it landing on more devices in the very near future. If you own the Moto Z Play and are looking forward to getting this update, you can head into Settings > About Phone > System Updates and tap on Check for Updates to see if you can pull down the update and update your device. If not, you’ll just have to wait until it actually makes its way on over to your Moto Z Play. With this, all of the Moto Z smartphones have received or are receiving their update to Android 7.0 Nougat. Which is pretty impressive for Lenovo and the Moto team. 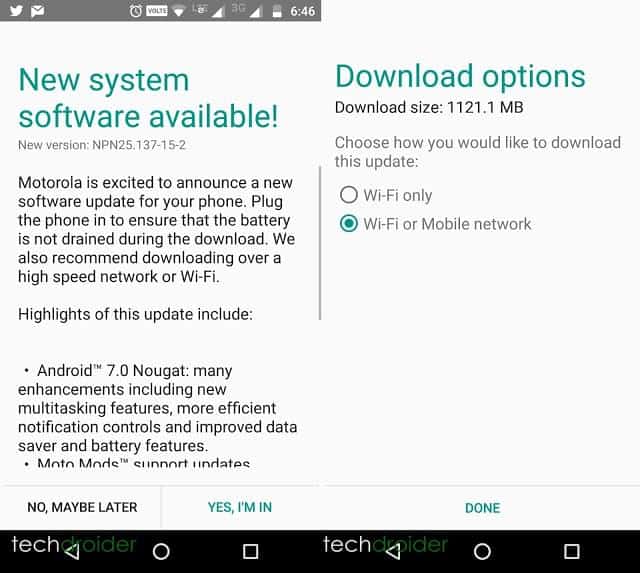