Now, Xiaomi had already confirmed that the Xiaomi Mi MIX will get the Android 7.0 Nougat update at some point, they did say soon, but did not specify when exactly. The Xiaomi Mi MIX is not the only Xiaomi-branded smartphone that is expected to get this update in the coming weeks, the company’s Mi Note 2 flagship is expected to get the update soon as well, and same goes for the Xiaomi Mi 5, Xiaomi Mi 5s, Xiaomi Mi 5s Plus, Redmi Note 4, and a number of smartphones. Xiaomi actually plans to update quite a few devices to Android Nougat, even some older handsets. It’s worth mentioning that the company has been testing this update for a while now, even some beta builds of Nougat-powered MIUI 8 have been available for quite some time now, and the Mi MIX is amongst them, as a beta build of Nougat-powered MIUI 8 is available from the company’s official website as we speak. Android 7.0 Nougat will bring quite a few improvements to MIUI 8, but do keep in mind that you probably won’t get the vast majority of features that were introduced by Google last year, at least based on the beta build. Features like threaded notifications will probably arrive with MIUI 9 later this year, which will also be Nougat-based, though we’re only guessing based on the beta update, it is possible that the final build of MIUI 8 will arrive with such features as well.

The Xiaomi Mi MIX is one of the most innovative smartphones of last year, mainly thanks to its interesting design with no bezels on the sides or the top of the device, and also some interesting features. This phone, for example, doesn’t have a regular earpiece, as it doesn’t have any bezel above the display. In any case, we’ve already reviewed the Xiaomi Mi MIX, so if you’d like to know more about the device, feel free to check it out. 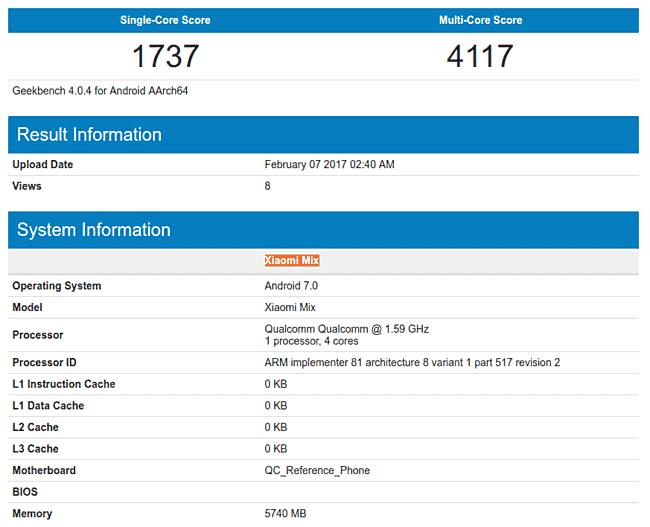